Volume > Issue > Will Modernity Mean the End of Catholicism? 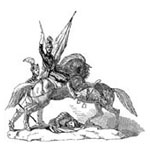 Will Modernity Mean the End of Catholicism?

THE "MOMENT" THAT NEVER AROSE

By James V. Schall | November 2014
Fr. James V. Schall, S.J., is an emeritus professor in the Department of Government at Georgetown University. Among his many books are The Order of Things, On the Unseriousness of Human Affairs, The Modern Age, and The Mind That Is Catholic. His most recent book is Political Philosophy and Revelation: A Catholic View.

“From the time that the Bishop of Rome had gotten to be acknowledged for bishop universal, by pretense to succession to St. Peter, their whole hierarchy, or kingdom of darkness, may be compared, not unfairly, to the kingdom of fairies, that is, to the old wives’ fables in England, concerning ghosts and spirits, and feats they play in the night.”— Thomas Hobbes, Leviathan

“The greatest achievement of the West is the creation of the United States of America, which selected immigrants from all nations in a new, non-ethnic polity defined by a Constitution inspired to a great extent by ancient Israel. When Christianity failed to overcome the residual tribalism of the West, its universalizing message was replaced by relativism. The reigning dogma in the secular West now states that every ethnicity is entitled to its own ‘narrative’ and that all cultures are equally valid in their own terms. Relativism refuses to consider the obvious fact that some cultures succeed while others fail miserably; it insists on the absolute right of self-definition and self-termination for every tribe.” — David Goldman, “Common Traits Bind Jews and Chinese,” Asia Times (Jan. 10, 2014)

The confrontation has been looming on the horizon for a long time. Obamacare’s contraception mandate, and a United Nations committee’s finding the Vatican in violation of the “rights” of children, brought into clear view what has been evolving perhaps since the intellectual origins of modernity itself. Throughout the centuries, Catholicism has sought ways to adapt to new eras, their challenges and developments. But many early Catholic voices did not think that the comingling of modernity and Catholicism was wise or even possible. Yet the overwhelming feeling was that it would be embarrassing to be thought of as out of step with the modern world.

The Church herself in the past century incorporated at least the language of Thomas Hobbes in order to express her teachings in terms of “rights.” The UN’s “Universal Declaration of Human Rights” seemed, under the influence of Catholic philosopher Jacques Maritain, to use the word rights in a way that Catholics could accept. The ecclesiastical usage of this word was thought, too often uncritically, to be at least compatible with the natural law and reason. Rights were thought to relate to prior duties. In recent decades, however, rights have been ever more effectively used to isolate and exclude Catholicism from the public square. The Church is now seen in the eyes of the modern world as a major impediment to the ascendancy of a culture completely based on human rights, as perhaps the major obstacle to the modern project’s full control of the culture.

In the U.S., we have long debated the nature of the founding of our country. Was its origin in classical or modern thought? Was it specifically Protestant? Catholic thought maintained a broader tradition that included the Catholic origins of Europe, the absorption of the barbarian tribes into the unity of the Greco-Roman tradition. America was an exception. Was America an “ancient” founding, as David Goldman says, with its primary roots in Israel rather than Rome? Most Catholics would argue, in the tradition of Christopher Dawson, that America’s founding included Israel, Athens, Rome, and the medieval synthesis.

What Happened to Bill Donohue?

The Catholic League leader has been defending some unlikely characters, including Fr. Maciel and Archbishop Weakland.

The conceit of the Enlightenment was that we could have the good of Christendom without the Church. “Judeo-Christian Westernism” assumes this.