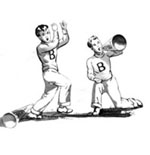 A GERMINATING IN THE WEEDS OF IDEOLOGICAL SECULARISM

By Michael B. Ewbank | September 2016
A retired professor of philosophy, Michael B. Ewbank taught at Stonehill College in Easton, Massachusetts, and was a tenured Professor of Philosophy at Loras College in Dubuque, Iowa. After that, he taught for five years at Our Lady of Guadalupe Seminary of the Priestly Fraternity of St. Peter in Denton, Nebraska. His publications include essays and research articles, the former in specialized collections and the latter in blind-refereed journals, such as The Review of Metaphysics, American Catholic Philosophical Quarterly, Heythrop Journal, Mediaeval Studies, Archives d'histoire Doctrinale et Littéraire du Moyen Âge, The New Scholasticism, Pensamiento, Ciudad de Dios, and Cuadernos Salmantinos de Filosofía.

Approximately fifteen years ago I approached officials at a large, secular state university in the Midwest to inquire about the possibility of having credits recognized for courses in philosophy and theology that students might take at what was to be a small, autonomous Catholic college supported indirectly by an approved religious institute. I spoke with the dean of arts and sciences and other officials in the administration about whether such a program was feasible and what it might involve. The enterprise would have offered courses in only the two disciplines, some of which might be accepted by the university as transferable credits applicable toward certain requirements for its programs but which would not duplicate offerings already established within its curriculum.

After obtaining confirmation that such might be accommodated, I inquired directly with officials at North Central Accreditation about the proposal, and they told me that such a collegium could achieve accreditation of its courses, so long as its personnel and resources were truly appropriate for, and capable of, achieving its formally stated objectives. Unfortunately, officials of the religious institute lost interest in the project. However, the original idea never ceased to attract me since I continue to believe that we need a new educational “model” in what is euphemistically termed the “postmodern era,” in which most centralized institutions are going to be strained to the breaking point.

Why, one might ask, should we consider an alternative model when many established institutional options are already available to Catholics? I think such an endeavor could compensate, to some degree, for our present situation, in which many Catholic colleges and universities, so generously constructed by our ancestors, have, with very rare exceptions, lost their Catholic soul. The reasons for this are numerous. In varying manners and degrees during the past decades, Catholic institutions of higher education have made many arbitrary and abusive implementations of the imperatives of the Second Vatican Council. As a corollary, there has also been a tendency to steadily permit or encourage the induction of ever higher ratios of non-Catholics or, even worse, heterodox Catholics into tenured faculties of what are increasingly only nominally Catholic academic institutions. For instance, in 2006 approximately fifty percent of the faculty at the University of Notre Dame were professed Catholics, a reduction from eighty-five percent in the 1970s. (Tellingly, after 2009 the university ceased publishing the percentage of Catholics on its faculty.)

Even when a Catholic institution is fortunate enough to have a substantial number of non-Catholic faculty who possess the integrity never to undermine its primary finalities, the lack of a common enculturation inevitably affects the coherent formation of the students who pass through such a community. Of course, homogeneity or regimentation are not what one seeks to inculcate. But in prior eras, one could expect Catholic colleges and universities to promote an awareness of the profound analogical order and unity among the truths attained in the diverse disciplines studied, along with how these are coherently and ultimately integrated in light of sacred theology, which elucidates action and belief illuminated by faith.