Volume > Issue > Who's Afraid of the "New Breed" of Priests? 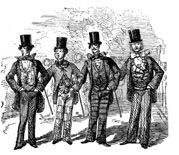 Who’s Afraid of the “New Breed” of Priests?

THE GENERATION GAP IN THE PRIESTHOOD

By Michael S. Rose | December 2001
Michael S. Rose, of Cincinnati, is author of The Renovation Manipulation. His latest book is Ugly as Sin: Why They Changed Our Churches from Sacred Places to Meeting Places (Sophia Institute Press).

Over the past several years a stream of articles addressing the new “conservatism” among Catholic seminarians has seen publication in both the Catholic and secular press. Many of these have highlighted the widening generation gap between 1960s-style priests (i.e., those who are now in charge of most of the institutions in the Church) and their younger counterparts who, braving seminary straits, are emerging as faithful sons of the Church. Perhaps the most prominent article of this new genre was a New York Times Magazine cover article headlined “The Last Counterculture” (Apr. 4, 1999) — referring to the priesthood.

The response generated by such articles is more revealing than the articles themselves. Jeannette Batz, columnist for the liberal National Catholic Reporter, for instance, responded to the Times Magazine article quite passionately. In short, she was offended.

“Really good priests don’t live at a remove from culture,” Batz contended. Batz sees these young seminarians as scared little boys — “scared to watch TV or listen to James Taylor.” Are these seminarians really scared or might they manfully be seeking to avoid the temptations of the world, to lead lives more conducive to carrying out their ministry?

Is George Will Actually a (20th-century American) Liberal in Disguise?

George Will has argued that in America “there are almost no conservatives, properly understood.” Yet…

Difficulties arise when women wear tight or revealing pants to Church: Men start seeing them as a collection of titillating body parts.