Volume > Issue > Whither Goeth the Reform of the Reform? 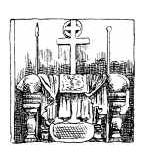 JUMP-STARTING THE RESTORATION OF THE SACRED LITURGY

By Ken Skuba | September 2010
Ken Skuba is Grand Knight of a chivalrous boys' organization called Order of Knights of the Most Precious Blood, Inc., whose members include altar boys in northeast Pennsylvania. He is a member of the newly formed St. John Neumann Latin Mass Community, a grassroots group formed to promote the spread of the Tridentine Latin Mass. He and his wife, Susan, and their five children live in Sugarloaf, Pennsylvania.

Monsignor Guido Marini, the Vatican’s chief liturgist, recently endorsed calls for a “reform of the reform” of Catholic liturgy, a movement aimed at restoring order and reverence to the Novus Ordo Missae, or New Mass. It’s not a new idea. In 1997 the future Pope Benedict XVI wrote, “I am convinced that the crisis in the Church that we are experiencing is to a large extent due to the disintegration of the liturgy…. When the community of faith, the worldwide unity of the Church and her history, and the mystery of the living Christ are no longer visible in the liturgy, where else, then, is the Church to become visible in her spiritual essence? Then the community is celebrating only itself, an activity that is utterly fruitless.” In many places, celebration of the Mass is so far removed from what Vatican II intended that true reform seems impossible. Where does one begin?

The Church, the argument goes, must move slowly in liturgical matters so as not to upset Catholics who’ve grown attached to the new form of the Mass. In prudence, one must agree. However, the same argument seemed lost on Rome when, on that first Sunday in Advent in 1969, the Church dropped the Tridentine Latin Mass like a hot potato and embraced a form of worship that was alien to everyone. In his general audience on November 26, 1969, a week before the revised liturgy debuted, Pope Paul VI warned, “We shall become aware, perhaps with some feeling of annoyance, that the ceremonies at the altar are no longer being carried out with the same words and gestures to which we were accustomed…. This novelty is no small thing. We should not let ourselves be surprised by the nature, or even the nuisance, of its exterior forms.” Surely, the coming changes were not a complete secret by November 1969, yet the Pope was nonetheless bracing everyone for a big surprise. Yes, even a “nuisance.”

When I returned to the Church nearly three decades after the reforms instituted by Paul VI, the Mass was being celebrated in widely varied ways. At the parishes in my city, no two Masses were exactly alike. At one parish, we held hands during the Our Father and, at the sign of peace, parishioners left their pews and crossed aisles to shake hands and exchange pleasantries. The pastor, too, stepped down from the sanctuary to greet folks, sometimes four and five pews deep. I saw abuses at every local parish I visited. Priests omitted or added language as they saw fit, ad-libbing and telling jokes. Parishioners used gestures and participated in parts of the Mass reserved for the priest. One thing, though, was the same at every parish: The music was universally bad. I am no expert on sacred music, but even my untrained ears can recognize music that lacks a sacred character worthy of the sacrificial nature of the Holy Mass.

I have read that a Catholic could go to a Roman rite Mass anywhere in the world and it would be the same. Without leaving the city limits, though, I found that this wasn’t true. My wife and I have parish-hopped in search of an elusive combination of liturgical reverence and doctrinal orthodoxy. Returning to my boyhood parish, we found that the pastor was thoroughly orthodox but was burdened with a string of assistant pastors who came and went, each with his own unique style of ad-libbing at Mass. One assistant pastor gave sermonettes before each reading, in addition to a homily after the Gospel. He often interjected little thoughts or reflections at other times of the Mass as well. Another assistant told jokes before every homily, some that even poked fun at Catholic piety and devotions. Another assistant once gave a silent homily in which he brought shaving props into the sanctuary. Quietly, he lathered up his face, shaved, toweled dry, and then uttered a single word for reflection. I can’t remember the word because I am still in shock at what I witnessed. Incredibly, this Mass was televised on a local station that aired the Mass for “shut-ins.” Perhaps viewers thought it was a commercial for shaving cream. The experience of profound worship I’ve longed for was not to be found at my boyhood parish. All that was left was the endless “nuisance” Paul VI had warned about.

The 'Signs of the Times' Have Passed Them By

Traditional Catholics know which way the wind is blowing. How brutal for the Vatican II-niks! The "signs of the times" have passed them by.

Does the Pope's universal idult for the Traditional Latin Mass necessarily mean that Fr. Fessio's "reform of the reform" is dead?

For Fear of the Jews

Nobody would ever mistake the timid troupe that makes up the majority of Catholic bishops for radical imams who issue fatwas.