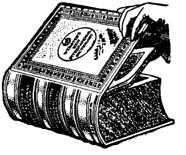 By Mark P. Shea | September 1996
Mark P. Shea is a Seattle writer. He is also the author of This Is My Body: An Evangelical Discovers the Real Presence (Christendom Press).

Ed. Note: Mark P. Shea, a former Evangelical and now a Catholic, here recounts his thought processes when he was an Evangelical considering the role of tradition, which Evangelicals supposedly reject, in Evangelical belief and practice. The following article is adapted with permission from Shea’s book By What Authority? An Evangelical Discovers Catholic Tradition, published this month by Our Sunday Visitor Books (800-348-2440). In the book he examines five areas where Evangelicals unknowingly treat Catholic tradition like authoritative revelation. In this article he discusses three of them.

I wondered: Is it really true that we Evangelicals never treat extra-biblical tradition as authoritative revelation? Is it really the case that all Evangelical belief is derived from the clear and unambiguous teaching of the Bible alone? Do we really speak forth only what Scripture speaks, keep silent where Scripture is silent, and never bind the conscience of the believer on those questions in which Scripture permits different interpretations?

To find out, I decided to try an experiment. I would look at Evangelical — not Catholic — belief and practice to see if there were any evidence of tradition being treated like revelation. I would see if there were any rock-bottom, non-negotiable, can’t-do-without-’em beliefs that were not attested (or very weakly attested) in the Bible, yet which we orthodox Evangelicals treated like revelation. If I found such things, and if they had an ancient pedigree, it seemed to me this would be very strong evidence that the apostolic tradition not only was larger than the Bible alone, but had — somehow — been handed down to the present.

So I started taking a good long look at non-negotiable Evangelical beliefs as they were actually lived out in my church and churches like it. To my surprise, I found several such weakly attested nonnegotiables.