Volume > Issue > What If Catholics Weren't So Wimpy? 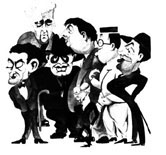 What If Catholics Weren’t So Wimpy?

OUR CULTURE'S FEAR OF A ROBUST CATHOLICISM

By James V. Schall | June 1996
The Rev. James V. Schall, S.J., is Professor of Government at Georgetown. His At the Limits of Political Philosophy is due out from Catholic University Press this month.

After breakfast on March 14, I was sitting in our Jesuit community recreation room reading about the NCAA basketball tournament in a newspaper. A friend of mine who was across the room brought over a copy of The Washington Times for that morning. “Take a look at this ad,” he told me, showing me a full-page advertisement in very bold and large print, with the glaring headline, “Why Are Catholics So Wimpy?” Well, I confess that this question echoes a frequent concern of mine — my book Does Catholicism Still Exist? brings up the point in another way. How can it ever have come about, one wonders, that anyone could ever consider calling Catholics “wimpy”? The fact is that to many people wimpy is how we often appear, wimpy and wishy-washy.

Catholicism boldly asserts that it stands for something distinctive, but many calling themselves Catholic who reject Catholic teachings are seldom challenged. Bishops in their corporate capacities have positions on every imaginable public policy, but practically no deviation from doctrine or moral practice, especially by an academic or public official, is addressed, save for rare cases such as — currently — by the Bishop of Lincoln. Usually the few bishops who try to correct departures from Catholic teaching take such flak that nothing further happens; they give up, knowing the other bishops will not back them. Llewellyn Rockwell said what many think:

Christianity is now thoroughly politicized. The [Catholic] bishops and [Ralph] Reed have no trouble speaking about the importance of pro-family legislation, or the glories of religious pluralism, but they are shy about such basics as the Christian teaching on salvation. The longer the process of politicization continues, the thinner the faith gets. Political ambition causes people to water down their beliefs for the sake of gaining favor. The hazard is especially prevalent in a society with competing religions. The first stage of sell-out comes with the exaltation of political pluralism above doctrinal truth, the second stage with the denial of doctrinal truth altogether for achieving political goals.

One might note that John Paul II’s encyclical on the diversity of religions, Ut Unum Sint, took particular care to avoid this very real tendency to minimize doctrine.

Margaret Sanger, the founder of Planned Parenthood, saw herself as “The New Woman,” one emancipated…

The Most Basic Things

One of Pope John Paul II's most poetic acts was to bestow the red hat on the aged Henri de Lubac, whose only diocese was a stack of books.