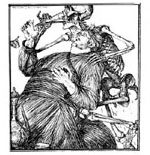 By Will Hoyt | January-February 2016
Will Hoyt became well known to NOR readers as "the Berkeley carpenter" during the late 1980s and early 1990s before abruptly laying down his pen and moving to the Allegheny plateau to become a farmer. After a nearly two-decade hiatus, Hoyt has begun to write again while operating an inn for oil and gas workers in eastern Ohio. His articles have appeared most recently in University Bookman and Front Porch Republic.

Ed. Note: The first installment of this two-part series appeared in our December 2015 issue.

When, as a younger man living out west, I planned backpacking routes in the Cascades or the high Sierra, I used to study the relevant U.S. Coast and Geodetic Survey’s 7.5-minute topographical maps for hours, and I was always amazed at the power of these things to hold one’s attention. Was it their reliance on contour, which turns out to be (referencing Isaiah) a level road leading to water? Whatever the appeal, looking at, say, the “Mt. Challenger quadrangle” whetted my appetite for actually walking in high country, and I experienced some of the same pleasures while looking at the Weirton, Steubenville, and Flushing quadrangles after I had moved east. For example, I could see that this entire area was, in fact, as guidebooks had said, a “dissected plateau” — nearly every ridgetop featured the same elevation. Also, I could spot migration routes — in several places, tributaries emptied their waters into the Ohio River directly across from each other, and lo, the names of the creeks matched, indicating that the original settlers thought of the creeks as trails. (One set of creeks, the one the Norfolk and Western railroad follows, is even called “Cross Creek.”) Finally, I could see that the Ohio River, too, “meanders.” You wouldn’t know it driving north along Route 7, but thanks to my trusty wall mural of contiguously placed, tacked-together topos, there it was, plain as day: Parts of Toronto and all of downtown Weirton used to be river channel.

Unlike the quads I studied in California, however, eastern Ohio topographical maps also show strip mines, and that particular feature complicates their revelatory potential. Indeed, when considered singly, the maps frustrate more than they intrigue, for when it comes time to “map” a mined area, draftsmen switch to a rosy, pointillist pattern to indicate the unavailability of contour lines — which is to say, the loss of the very reference points topographical maps depend on to provide the kind of information you buy them for.

Given that terrain in a stripped area sports neither rhyme nor reason, mapmakers in effect throw up their hands when it comes time to chart a surface mine. Therefore, the viewer of an eastern Ohio topo often finds himself looking at, well, nothing. But if you put that map on a wall — if you fit it to other, adjoining puzzle pieces — everything changes. Suddenly, the troublesome maps become resplendent with sense, for at that moment you find yourself looking not so much at randomly occurring red smudges as at a concentrically organized, roseate bloom. In other words, you find yourself looking at an explosion. You see this region going up in flames.

Just what was it that detonated here? How potent were the flames? Did they sear minds as well as land? What, in other words, was the extent of the concussive force? And what kind of circuitry could have enabled the explosion in the first place?

For the past ten years, I have been trying to find answers to these questions.

I believe that there is room for the faithful doubters in the Catholic Church, but only so long as they can transcend their doubts and accept the Creed.

Fed Up With Being a Rat In a Liturgical Lab

Tolkien’s The Hobbit or There and Back Again is the quintessential quest story. Familiar places…

The typical student in religion class today has never been required to think deeply about the more complicated or abstract concepts of Catholicism.