Volume > Issue > What Government Can Do for the Family: Just Leave It Alone! 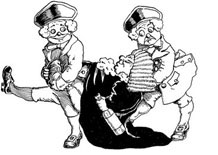 What Government Can Do for the Family: Just Leave It Alone!

By Thomas Fleming | December 1998
Thomas Fleming is Editor of Chronicles: A Magazine of American Culture. In 1996 he left the Episcopal Church and became a Catholic.

G. K. Chesterton described the home as the one anarchist institution. His choice of words was perhaps wayward. In most homes there is nothing anarchic; on the contrary, a good home exhibits a traditional structure of authority and division of labor based on sex, age, and relationship. Even the word “institution” is misleading, since it implies a beginning, some act of establishment. Let Marxists speak about the “institution” of the family, for they regard it as an artificial construction imposed by tyrannical men. Christians have a better language.

I am being deliberately unfair to Chesterton, who, as usual, by getting the details wrong has got the essentials right. He goes on to say that what he means by “anarchist institution” is that the home “is older than the law and stands outside the state.”

This is a very ancient way of viewing the home and the family that lives within it. It is the general Christian view, as well as the opinion of the wisest ancient pagans. In the 20th century this vision of the family as the precondition for human society has been labeled “agrarian” or “distributist,” but this view of the family is neither regional nor recent; it is, for the most part, the common sense of Christendom.

In recent American intellectual history, the term “agrarian” is usually applied to the group of writers whose essays appeared in I’ll Take My Stand (1930): John Crowe Ransom, Allen Tate, Donald Davidson, and Andrew Lytle; to their students such as Richard Weaver and Mel Bradford, and the novelist Madison Jones, and to their admirers, friends, and disciples. Prior to that, there was an American agrarian tradition represented by Thomas Jefferson, John Taylor of Carolina, and Edmund Ruffin — all of whom believed that the nation’s strength and integrity rested on the shoulders of independent-minded farmers.

In February 1931, Jesus appeared to Faustina with a message that launched the mission for which he had been preparing her from the beginning.

Ernest Gaines & the Triumph of the Human Spirit

Artists are prophetic because they see and experience what those at a distance take longer to see.