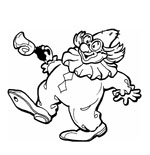 Theology According to Student Bloopers

By Tom Beaudoin | September 2009
Tom Beaudoin is Associate Professor of Theology at Ford­ham University in New York City. His most recent book is Witness to Dispossession: The Vocation of a Post­modern Theologian, and he currently directs the Rock and Theology Project (www.rockandtheology.net).

Before coming to Fordham to teach graduate students full-time, I taught many undergraduate courses over seven years at Boston College and Santa Clara University. During that time, I collected a list of “student bloopers” gathered from their assignments. I did so inspired by the years of laughter provided by the memory of an article I read in the early 1990s by Richard Lederer, then at St. Paul’s School, titled “The World According to Student Bloopers.” That pre-Web article can now be found everywhere on the Internet. Early on in my trundle through thousands of undergraduate papers and exams, I realized that student bloopers were not only entertaining, and often wickedly so, but occasionally generative of a pleasantly orthogonal angle on theology that stayed with me long after reading them.

My collection and presentation of student bloopers does not, of course, mean that I myself am not given to error. I am, and constantly — in both “style” and “substance.” But somehow those just aren’t as funny. Or at least no one has yet collected mine. So here, with the most minimal of editing, is what I have after my first seven years of teaching theology.

My girlfriend is my most coveted possession. Our love is similar to that shared by Adam and Eve during the reading of the creation story. I believe that God gave sex for humans to use in the pretext of marriage.

The question of whether a higher being exists has plagued man since the beginning of civilized society. The question “Who is God?” is one that has been bounced continuously back and forth. Many ask why God acts the way He does, while others ask the question why doesn’t God act the way He does.

The dessert ascetics believed in the ascendance of God.

I think God’s ways are mysterious, and the meaning is not going to jump out and bite us in the ass.

God is a different person to everybody, and to some He may not have a corpulent form at all.

Theocratically, God is so far more advanced than mankind. And while there is nothing you can do to impress God enough to give you internal life, universal salvation is a huge turn on.

Certain aspects of Catholic belief are founded on realty.

The Catholic religion remains strict on their teachings in order to withhold tradition. However, through Vatican II, Christians are now not the only good people in the world.

Letters to the Editor: September 2020

The Waiting Is the Hardest Part... Fr. Maciel’s “Lieutenants”... Worthy of the Original... The Coronavirus Conundrum... Sympathy for the Stones... and more