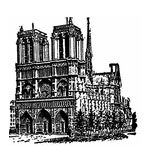 By Michael S. Rose | September 2009
Michael S. Rose, Associate Editor of the NOR, is the author of six books, including Ugly As Sin, which was recently released in paperback by Sophia Institute Press (1-800-888-9344; www.sophiainstitute.com), and from which this article is excerpted.

One basic tenet that architects have accepted for millennia is that the built environment has the capacity to affect the human person deeply — the way he acts, the way he feels, and the way he is. Church architects of past and present understood that the atmosphere created by the church building affects not only how we worship, but also what we believe. Ultimately, what we believe affects how we live our lives. It’s difficult to separate theology and ecclesiology from the environment for worship, whether it’s a traditional church or a modern church. If a Catholic church building doesn’t reflect Catholic theology and ecclesiology, if the building undermines or dismisses the natural laws of church architecture, the worshiper risks accepting a faith that is foreign to Catholicism.

That’s why the Code of Canon Law explicitly defines the church building as “a sacred building destined for divine worship” (canon 214). The Catechism of the Catholic Church reiterates this point and goes further by stating that “visible churches are not simply gathering places but signify and make visible the Church living in this place, the dwelling of God with men reconciled and united in Christ” (#1180).

This is a tall order, to be sure, and the architect today naturally wonders how a mere building can accomplish so much. Fortunately, he doesn’t stand alone in a perilous vacuum but has at his command more than fifteen hundred years of his craft on which to reflect.

When he turns to the Church’s great architectural heritage, he discovers that from the early Christian basilicas in Rome to the Gothic Revival churches of early 20th-century America, the natural laws of church architecture are adhered to faithfully in the design of successful Catholic churches, buildings that serve both God and man as transcendental structures, transmitting eternal truths for generations to come.

Consider, for example, Notre Dame de Paris, the crowning jewel of Paris, arguably the most famous of Christendom’s great cathedral churches. Countless chronicles, poems, novels, and artistic treatments have been devoted to this architectural masterpiece. Yet, considering it’s neither the tallest, the biggest, nor even the most beautiful of cathedrals, Notre Dame’s universal appeal isn’t easily explicable on the natural order.

An Outsider's Impressions of the Modern Mass

It is a non-negotiable fact about me (and probably many others as well) that I do not sing where even friendly strangers can hear.