Volume > Issue > The Realm of Faith 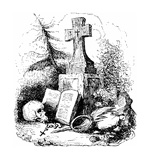 The Realm of Faith

By Douglass H. Bartley | September 2010
Douglass H. Bartley of Ely, Minnesota, a former judge, is the author of a treatise on the Constitution, The Kiss of Judice: The Constitution Betrayed: A Coroner's Inquest and Report, the first parts of which have been published on his blog, "Pastoral Republican," found at http://douglassbartley.wordpress.com/. Epistle 1, "The Proof of God's Existence," appeared in the January-February issue of the NOR; Epistle 2, "The Realm of Reason," in May. Epistle 4, "The Realm of Faith, Continued," is forthcoming.

“Words are like leaves, and where they most abound,
Much fruit of sense beneath is rarely found.”
The aim below, ’tis my wish and my hope:
Comply with the decree of Master Pope,
And squander not words, nor waste precious time,
And blight not Doctrine put to verse and rhyme.
For Canons ought not the foolish to bear.
So, please God, as I write this prayer,
Give content, balance, junction to each part,
And let faith be enhanc’d by reason’s art.

That God is, was prov’d by bare reason ‘lone
With demonstrations eight, as have been shown,
By Thomas from effects, Cause God deduc’d;
And other sages by whom God educ’d.
The order, beauty of Creation show,
From Nature’s realm, through reason God to know.
Man’s reason, though the great Almighty’s gift,
Cuts a small clearing where we can sift
Invisible things by grace He hath reveal’d
The mysteries of faith elsewise conceal’d,
Ineffable but for the faith’s constant light.
And for bare reason far too recondite.
Faith, reason, two wings by which Man could soar,
Truth to discover, errour to abhor.
For sunder’d from truth, Man’s mir’d in folly,
In data-muck, in permanent ennui.
Leave trifles behind, shrug off all caprice;
Quit those immers’d in the aridities:
“Whom folly pleases, and whose follies please.”

In Honor of Chateaubriand

Awhile back, 1794 to be exact, Maximilien Robespierre fretted about the lapse of reli­gious sentiment…

Fr. Paul Shaughnessy blows the lid off the homosexualist subculture in the priesthood.

Review of Possum and Other Receits for the Recovery of "South­ern" Being... All the Right Enemies: The Life and Murder of Carlo Tresca... Letters of C.S. Lewis and Don Giovanni Calabria: A Study in Friendship... This Tremendous Lover.... Southerners and Europeans: Essays in a Time of Disorder