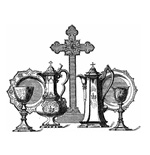 The Holy Eucharist & Salvation by Faith

A TRULY 'PERSONAL RELATIONSHIP' WITH JESUS

By Stephen Rombouts | June 2010
Stephen Rombouts is a university administrator and adjunct history instructor in Pennsylvania. He thanks his son, Frederick, for asking the question that inspired this article, and for providing insightful critique.

Few controversies have compromised Christian unity more than the dispute over salvation, and nothing has obscured our understanding of salvation more than the question of faith and works. Conventional responses commonly assign an explicit role to faith or works in salvation: We are “saved by faith” or we are “saved by good works” or by some combination of the two. But faith and works are attributes of the authentic means of salvation, which is communion with God through the Holy Eucharist: Man believes, in faith, that the bread and wine become the body and blood of Jesus Christ, and acts upon that faith by receiving the Blessed Sacrament in Holy Communion. The Holy Eucharist is the central reality of all human experience. It transcends time, space, and matter, and unites believers physically and spiritually with God. It is the essence of the Living God, and the sine qua non of human salvation.

The truth of the Eucharist should be evident to anyone who approaches the Gospel with an open heart. Yet, five hundred years after the Protestant revolt divided the Church in the West, many still misunderstand the words of Holy Scripture by which Jesus Christ described the essential role of His body and blood in our salvation. Regrettably, the ability of traditional Catholic apologetics to restore Christian unity has suffered from the circular arguments that can arise when a distinctly Catholic rationale or Catholic sources are cited to support Catholic doctrine. A system of Catholic apologetics that would appeal to nonbelievers cannot assume, a priori, the legitimacy of the institutional Roman Catholic Church. Let us, therefore, set aside Church authority and tradition, and approach our topic solely on the authority of the Bible, which our separated brethren are inclined to accept in general principle, citing only the King James Version, to preclude any suggestion that Catholic translations of the Bible and Catholic doctrine have been manipulated in order to corroborate one another.

Non-Catholic Christians commonly believe that we are saved by faith (sola fide) grounded in the authoritative truth of the Bible (sola scriptura). They are correct on that point, as far as it goes: The problem is that it does not go far enough. Devotion to “the Word of God” often takes the form of enthusiasm for the words of Scripture as linguistic constructions or as conceptual abstractions, rather than for their substance. This problem is not new. Jesus Himself warned against excessive infatuation with the Bible for its own sake: “Search the scriptures; for in them ye think ye have eternal life: and they are they which testify of me. And ye will not come to me, that ye might have life” (Jn. 5:39-40). Factual knowledge of the Bible can be little more than an academic exercise unless it brings the believer to a true knowledge of Jesus Christ, who is both the source and the fulfillment of Scripture.

And so, let us invite our separated brethren to join us in a spiritual journey of scriptural interpretation based on fidelity to the words of Jesus.

What Baylor & Notre Dame Can Learn From Each Other

Forty years ago, in February 1977, the first issue of the newly named New Oxford…