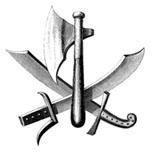 The following text was recently found on a scroll in a clay pot in a cave near the Dead Sea. The writer belonged to a powerful, wealthy, and influential class of ancient Judeans called the Amerisees. Experts estimate the scroll to be about 2,000 years old.

My allegiance is to my fellow Amerisees and to the scientific discipline whose purpose it is to measure the opinions of the Amerisees and report them to the Scribes. The basic tenet of our discipline, called sociolatry, is that “TLC is always the best policy” (TLC of course being The Largest Crowd).

In this report I will discuss the trends in public opinion surrounding a certain itinerant Galilean preacher and his followers. My colleagues and I have named their movement “Jeezianity,” since its basic belief is that a particular Jew, called Jeez-us-bar-David, is the expected Messiah. Our research indicates that popular sentiment among the Amerisees (whom we consider the only class whose opinions are worth measuring) has varied greatly over the last few years regarding this leader and Jeezianity. Jeez-us’s approval rating was at its highest when he fed a large crowd, raised the dead, and cured lepers and paralytics; it was at its lowest when he preached judgmentally against sexual freedom, insulted the Scribes and Amerisees, and exploded in violent, irrational anger in the Temple.

Despite Jeezianity’s growth in numbers and influence (indeed, I count myself a Jeezian), there has been a clear trend of late toward increasing distance between its leaders and followers. A growing number of Jeezian Amerisees — now 72 percent, with a four percent margin of error — are dissatisfied with Jeez-us’s refusal to name female or gay apostles. Amerisees who are Jeezians increasingly seek to be consulted about the development of doctrines; for example, none of them was consulted before Jeez-us came up with his controversial claim that Jeezians would have to eat his body and drink his blood to have his life within them — a statement that caused a fairly large number of potential disciples to turn away. The trends also indicate increasing dissatisfaction with Jeez-us’s condemnations of common sexual practices which most Jeezian Amerisees no longer regard as immoral. While they do not cease to regard themselves as Jeezians, these Amerisees do seek a more tolerant and less authoritarian Jeezianity, notwithstanding Jeez-us’s claims to divinity.

When Cosmoception Corporation sponsored a Coming Out of the Closet Celebration, the company ordered a rainbow-striped cake from Redneck Delicacies, Inc., a small shop tucked in the Appalachians.

I hated myself for helping the ape. I hated the pleasure his development gave me, like I was a god lifting this furry mute from stupidity.

Wormwood’s younger cousin, Lackluster, has received an unprecedented appointment for so young a demon.