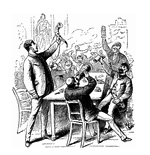 THE CULT OF EXPERIENCE

By Heather M. Erb | November 2008
Heather M. Erb, who has extensive teaching experience at the undergraduate and graduate levels at several major universities, including Fordham, Penn State, the University of Toronto, and St. Francis University, currently teaches graduate philosophy for The Catholic Distance University in Hamilton, Virginia, and is a visiting professor of philosophy at Lock Haven University in Pennsylvania.

If wisdom is, as St. Bernard of Clairvaux said, the ability to savor things as they really are, then making an effort to savor the true nature of human worship of the divine is time spent pursuing the highest of spiritual rewards. In an attempt to savor the fullness of the Catholic faith, some homeschooling parents recently expressed interest in attending a charismatic Life in the Spirit Seminar hosted by a Catholic parish in a central Pennsylvania university town. My experience as a professor who has taught scores of philosophy and theology courses at several Catholic colleges and universities has shown me the practical wisdom of reiterating information about various spiritual movements in the Church. Insights on how the charismatic movement impacts on the Roman Catholic faith tradition are neither rare nor novel, but are nonetheless part of the remedy needed for today’s theologically hard of hearing.

Enchanted as we are today by the cult of self-expression in all its guises — new prayer forms and postures, liturgical innovations, exercises in empowerment parading as catechetical programs — we seem more preoccupied with imaginary wounds to ecclesial communion than we are with the decades of theological bloodletting that continues to alienate the truth that binds us to the good. Like fundamentalism, the charismatic phenomenon often presents itself as a juggernaut that crosses denominational and faith boundaries. Like an appetite, the charismatic impulse goes out toward its fulfillment in a satisfying (and divine) object which it assimilates. The psychological and moral aspects of this appetite reveal a spiritual hunger, or desire, reminiscent of the medieval “concupiscent gaze” repudiated by SS Bernard and Augustine. The concupiscent gaze is a metaphor for the soul whose inner eye, or “eye of the heart” (oculus cordis), actively and aggressively consumes all in its path, instead of contemplating reality silently as a gift from on high.

The charismatic quest for paranormal experiences of God is also a desire for an ecstatic enclosing and enveloping of divine power, the spiritual parallel of St. Bernard’s image of a body that has become “all eye” in its consumptive gaze. Instead of approaching the spiritual life as a gourmand attacks a banquet table, however, Catholic mystics traditionally have savored the delights of divine things in the serene light of truth, with the aid of intellect, the in­strument that cleanses the inner eye by raising its gaze upward and beyond the experiential self.

According to St. Bernard, the process of spiritual detachment involves a purging of one’s body, will, and even memory, the storehouse of desire and experience, that “stomach,” “receptacle,” or “cesspit” that needs to be pumped out so that only humility and gratitude remain. This self-emptying of the spiritual ascent stands in sharp contrast to the self-centered metaphors of “filling up,” “empowering,” and “activating” that one meets in the charismatic vocabulary. Self-denial is also the condition for true communion with God and fellow man — a noble friendship fostered under the sun of reason, in contrast to the contrived pseudo-communion of ecstatic emotional dissolution.

An Interview With a Carmelite

A Carmelite monastery in Wyoming is an exciting new element in the Church in America, and has proven to be fecund ground for vocations to the consecrated life.

O Death, Where Is Thy…Tickle?

Everything in the old Requiem Mass forced us to consider death and God’s judgment, Christ’s mercy and our complacency.

A Catholic high school teacher explains why a trendy (and mandated) exercise is really just an exercise in narcissistic self-indulgence.