Volume > Issue > The "Biggest Nothing" in History 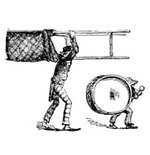 The “Biggest Nothing” in History

ON THE WEST'S IDENTITY ANXIETY

By Edwin Dyga | December 2016
Edwin Dyga is the Convenor of the Sydney Traditionalist Forum.

There has been virtually no commentary in traditionalist conservative quarters concerning the dialogue around the dinner table in the French plantation scene in Apocalypse Now Redux (2001), the “extended version” of Francis Ford Coppola’s cinematographic classic about the Vietnam War. This scene, which was cut from the original film (1979), contrasts two visions of conservatism that traditionalists and classical liberals would do well to note. This is particularly the case in an era dominated by the tension between abstract and particular notions of community, U.S. liberal imperialism, the seeming rebirth of the concept of the nation-state in Central and Eastern Europe, and the rising inertia behind populist politics throughout the West.

Much has been made of principal antagonist Col. Kurtz’s famous “diamond bullet” monologue, in which he intones, “You have to have men who are moral, and at the same time, who are able to utilize their primordial instincts to kill without feeling, without passion, without judgment. Without Judgment. Because it’s judgment that defeats us.” But this is no more than the stereotypical nihilist apologia illustrating the brutality to which unconstrained will-to-power could lead civilized man. On the other hand, the highlight of the restored plantation scene, the exchange between the film’s protagonist, Capt. Willard, and his host, Hubert de Marais, a French colonist who still lives with his family in war-torn Vietnam, is emblematic of a kind of romantic paleoconservative fatalism, but one based on an uncompromising commitment to preserving the concrete:

Willard: “How long can you possibly stay here?”
de Marais: “We stay forever.”
Willard: “No, no, I mean, why don’t you go back home to France?”
de Marais (visibly shocked): “This is our home, Captain.”
Willard: “Sooner or later —”
de Marais (angrily): “No! You don’t understand our mentality! The French officer mentality! At first, we lose in the Second World War. I don’t say that you Americans win, but we lose. In Dien Bien Phu, we lose. In Algeria, we lose. In Indochina, we lose. But here, we don’t lose! This piece of earth, we keep it! We will never lose it! Never!”

One rarely encounters an honest portrayal of a traditionalist worldview in the entertainment and news media, especially if it is contrasted to the nominalist, liberal status quo. “Identitarian” views — those rising from an ontology of identity — are, therefore, unable to advocate on their own behalf, unless they are framed in the narratives of liberation theology, minority identity politics, or the struggle for self-determination among Third World peoples. Coppola, however, featured the French colonists as the embittered underdogs. Their relationship to the land, and the way it informs their identity as a people, could be compared to the plantation homesteads and extended family networks of the Ancien Régime European countryside or the agrarian neo-aristocracies of the antebellum South. As de Marais explains to Willard:

See Captain, when my grandfather and my uncle’s father came here, there was nothing. Nothing. The Vietnamese were nothing. So we worked hard, very hard, and we brought the rubber from Brazil and then planted it here. We took the Vietnamese, worked with them, made something, something out of nothing. So when you ask me why we want to stay here, Captain, we want to stay here because it’s ours, it belongs to us. It keeps our family together. We fight for that! While you Americans, you are fighting for the biggest nothing in history.

This heated exchange occurs in the context of a hot war in Southeast Asia and a cold war globally. But it parallels contemporary themes common to all nations that were once part of the European empires and commonwealths of yesteryear. To this global diaspora — aware of its physical displacement and the gradual erosion of its cultural icons — these French colonists become deeply sympathetic characters. An old blind man at the dinner table optimistically muses that the Viet Minh can be worked with. A younger family member rebukes him: “Don’t you understand? The V.C. say, ‘Go away! Go away!’ That’s finished for all the white people in Indochina. If you are French, American, that’s all the same. ‘Go!’ They want to forget you!”

What Does Real Faith Require of Us?

“How do you feel about faith?”

The Hollywood Scandal Behind the Clerical Scandal

U.S. media and the American judicial system will gladly go after a high-ranking Catholic priest or bishop but will run cover for powerful Hollywood directors and actors.