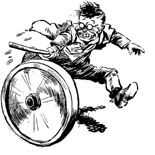 IS THERE A CATHOLIC VIA MEDIA ?

By Kenneth Colston | July-August 2020
Kenneth Colston, a retired teacher of languages, resides in St. Louis. His articles on literature have appeared recently in Logos: A Journal of Catholic Thought and Culture, Saint Austin Review, The New Criterion, Homiletic and Pastoral Review, Crisis, and First Things.

The coronavirus has revealed the wisdom of the Church in balancing God’s grace and human agency. I know, I know: God’s grace saves; I don’t and can’t save souls. Thinking so would make me a Pelagian to the early Church. Today’s Pelagians are self-promoting virtue athletes who want to hold high the heavenly prize for all to see. The Holy Father himself has warned us of these heretics.

Truth be told, I’ve not seen many of these folks around because I don’t watch the news. What I see much more of is another type of heretic who poses a greater danger now: Jansenists. They believe that God’s grace is everything, and our effort nothing. Jansenists are pious zombies who think they’ve been zapped into salvation with a magic wand. They turn uncreated grace into The Force Irresistible, for example, pointing to the sky after a home run, turning vocal prayer into an ecstatic Hare Krishna chant, straining for miraculous intervention after every faux pas, and even denying that the body of a fervent soul could be killed by a virus. You see them in the secular sphere, especially in the United States, and in all walks of Christian life, even among traditional Catholics, both cradle and convert.

Pelagianism and Jansenism both stifle the spiritual life, but Jansenism is especially paralyzing these days. It leads quickly to airheaded inertness and eventually to despair. Today’s Jansenists, once zapped, wait mindlessly for Shangri-la. When it doesn’t come (on average, I’m told, after three years), they leave their megachurch or their fortress of doctrinal purity and free up their tithing commitment. Pelagian virtue athletes at least have their virtue to show for their mistaken ways.

The Holy Father is right: Virtue-crazed Pelagians are Pharisees. Jesus had contempt for the Pharisaic religious superstar and knew that the wretched sinner pleading for mercy was closer to God. The sinner pleading for mercy is actually doing something. He’s pleading. He’s pleading with his hand cupped and quivering around his ear. The Pharisee, busy and dizzy in religious circles, only thinks he’s doing something. He doesn’t realize that he’s stuck in pious monotony. He’s not listening to God; he’s demanding that God — and everybody else — listen to him.

A Great Gift Book — But Give It Anonymously

"Cuss Control" suggests that some people who swear have an underlying problem of excessive anger and a bad disposition.

Whatever Happened to Apologetics?

Review of Handbook of Christian Apologetics