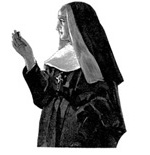 Requiem for the Tiger Nuns

IN PRAISE OF RAPS ON THE KNUCKLES

When the tiresome complaint arose again recently on a television program about the nuns of yesteryear hitting Catholic schoolchildren on the knuckles with a ruler, we undertook a nostalgic time trip back to the days when we sat in such nuns’ classrooms. When we were in eighth grade, one of us was laughing uncontrollably at the antics of a fellow student and was hit for it. The knuckle-rap was entirely deserved. Neither of us has ever felt any anger toward the nuns, then or now. At the time, it didn’t occur to us that the nuns were following the lead of Aristotle, who understood the value of a little discipline. Now, with some maturity, we recognize that this was an assertive teaching method that produced results.

We remember how the nuns prepared us for confirmation. Day after day leading up to the event, our entire eighth-grade class was directed to an assembly area, where we stood in formation in several rows, well spaced so the nun could walk between us, stand directly in front of us, or behind us. The nun would reach into her habit and pull out the Baltimore Catechism. We knew she would question each of us in order, but we didn’t know which question she would ask — we had to know the answer to every one!

It was the same for math and English: memorize the tables and the rules, diagram sentences, and be ready for a test. The slow learners were ordered to stay after school or to come to school an hour early the next day. The nun would line up these slackers along the side wall of the classroom and drill them one at a time. Those who didn’t catch on soon realized they’d never pass to the next grade; sometimes the nun threatened to take a poor performer back to a lower grade classroom that very moment! The kids quickly shaped up and applied themselves to learning in order to avoid the humiliation. It was an iron-fisted approach and it worked.

The Catholic high schools we attended were single-sex institutions — boys attended boys’ schools; girls attended girls’ schools. One of the reasons for the separation was the difficulty of disciplining boys. In one boys’ school, the assistant headmaster, a priest, was heard to say, “If we didn’t have the nuns, we couldn’t keep discipline.”

Doing Something About It

We think we can get by, but if some of our readers want to help…

In recent months, as I believe readers of this magazine were told, I suffered a…

"But What About Socialization?"

Many believe the problem with homeschooling is the socialization of children. One couple, however, believes they have the answer.