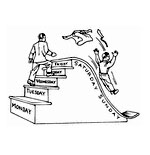 By Melinda Selmys | July-August 2014
Melinda Selmys is the author of Sexual Authenticity: An Intimate Reflection on Homosexuality and Catholicism, Sexual Authenticity: More Reflections, and Slave of Two Masters, a study of Catholic social teaching and a guide to the virtue of poverty for laymen. She has written for various Catholic publications including First Things, The Catholic Answer, and This Rock. She lives with her husband and six children in rural Ontario.

Michel Foucault (1926-1984) is largely considered a persona non grata within Catholic intellectual circles. He is associated with relativism, social constructivism, homosexuality, and the breakdown of Western social institutions. Our culture’s current crisis of faith has been traced, in part, to Foucault’s philosophy, which is understood as an attack on the foundations of truth itself. Although Foucault is guilty of numerous errors, there is a great deal of genuine value to be gleaned from his philosophy. Aristotle’s belief in exposing infants for population control did not prevent St. Thomas Aquinas from heavily mining his ideas, nor do we reject Plato because he proposed to control his Republic through a system of religious lies. Philosophy has always been the work of imperfect men fumbling toward the truth. Insofar as Foucault is different, he is different because he does not propose a systematic philosophy but presents his thought as a “toolbox,” inviting thinkers to take whatever is useful and ignore the rest.

The truths within Foucault’s work are attractive, they are particularly appropriate to our culture, they solve some of the deepest problems confronting the postmodern world, and they therefore have a wide social currency. Simply attacking his errors is, therefore, not sufficient. Christians must understand Foucault’s work and acknowledge what is true within it, in order to formulate an adequate response.

Let’s concentrate on three different themes that arise in Foucault’s work and analyze them in the context of Christian belief. The first is the means by which selves are produced through relationships of power and knowledge. The second is the concentration on intersubjectivity over objectivity as a means of approaching the truth. The third is the idea of philosophical ekstasis, and of truth as a historical process. We can situate all three of these analyses within Christian thought by recognizing that Foucault is a philosopher of fallen nature. His thought traces the development of truth through the historical period, revealing the disequilibria, tensions, and exploitations that arise from the relationship that was forged between power and knowledge as a result of our first parents’ appropriation of the right to “know good and evil.”

At the heart of all of Foucault’s philosophy is the notion of power. It is common for liberal thinkers, neo-Marxists, feminists, et al. to use the standard socialist understanding of power-as-oppression when interpreting Foucault, but Foucault himself rejects this interpretation. He sees power within society as a productive force that arises wherever human relationships are in disequilibrium. These relationships are dispersed throughout social space, and so power does not emanate top-down from a hierarchical structure that preys upon the weak, but rather emerges from innumerable points throughout society. Power is not a destructive force that ought to be resisted in the name of individual freedom but is the matrix in which personalities are forged. All forms of resistance to power are in fact exercises of power, and there is no autonomous self existing outside of social relations that can be sheltered and nurtured in isolation.

To Be a Faithful Catholic at Any Mass: A Pledge

This pledge, a response to the wide number of common abuses currently in vogue at many Masses, is for the individual Catholic and is intended to be kept as a reference.

Shrewd as Serpents, Innocent as Doves

Foreseeing the onslaught of distorted media coverage of the papal visit to Britain a group of fiathful Catholics banded together to set the record straight.

Walter Brueggemann, one of our most in­teresting Old Testament scholars, has called the present situation…