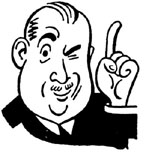 By Robert Coles | April 1995
Robert Coles is Professor of Psychiatry and Medical Humanities at Harvard University.

All the time, as a child, I heard my mother mention “the sin of pride,” though she wasn’t inclined to do so with anger, wasn’t inclined to point her finger, chastise me; rather, she would be the wry, ironic observer and teacher, ready to summon, say, Ecclesiastes (“vanity of vanities, all is vanity”) in order to give herself, never mind me, a bit of perspective on things. How well, for instance, I remember her response to an especially good report card I once brought home. I wasn’t such a good student at the time (fifth grade). I was, in fact, a noisy brat who hung out with two other boys just like me — a bothersome threesome to our teacher, who would call us “fresh,” tell us to mind our manners, threaten us with “demerits” and trips to the principal’s office, where we were roundly rebuked, sent back with warnings that our parents would be notified, that we would miss “athletics,” our favorite “subject,” and instead be asked to write 100 times avowals such as “I will obey the teacher from now on.” Still, in the clutch, I knew to shut up and try to behave myself, lest the teacher make good her promise to call my parents in for a “conference” — sometimes a child, thereafter, would be told to miss school for a few days. Now, for once, I’d parted company with all of that, turned into a momentary scholar of sorts, even secured a high grade in “conduct,” attesting to a spell of apparent obedience, respect for rules and regulation. Now I had evidence in hand, those letters “A” and “B” that had me, without reservation, on something called the “honor roll.” The teacher herself had sent a note home, meant to accompany the report card — an expression on her part of satisfaction, appreciation, even celebration. I had “quieted down,” my parents were told; I had taken a long first step on the way to being “good.”

To this day I recall my delight as I went home quickly with that report card and that letter — none of the usual dawdling, the diversionary tactics that could drive my mother (especially) and even my ever so reserved, even detached father to distraction: Where is he, and what is he doing now that will, soon enough, get him (and by extension, us) into some kind of trouble? I still remember, also, the satisfaction, the obvious pleasure my parents took in the card I handed them, and the teacher’s letter. My father allowed himself a thin smile, a wink: his wordless version of strong approval. My mother, far more talkative (a mixed blessing, I often felt) showered me with her appreciative gratitude. She “knew” I’d “pull through”! (Whence, I wondered, such knowledge on her part, when it certainly had eluded me?) She had “prayed” for this “turn.” (Is that what God has to hear, millions and millions of such entreaties — and how does He ever have the time to listen, never mind respond?) She had spoken to her sister about this matter of a son’s rebelliousness, and she, a schoolteacher herself, then living in Sioux City, Iowa, had counseled “patience,” had urged my folks to let me “grow up,” as assuredly I would. (But I had heard them criticize so-called grown-ups for the very qualities they found all too present in me — a naughty disobedience, a rebellious streak). Still, these perceived qualms or doubts on my part — a child questioning his parents, even as they worried long and hard about his inclination, at school, to question (to defy) adult authority — had at last given way to a swell of self-satisfaction, and, with it, good will, as my parents remarked upon (or in dad’s case, indicated) their relief, their approval.

These days in the privileged precincts of America, gluttony is an all too evident aspect…