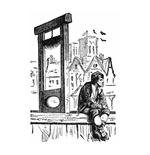 LET THEM COME TO ST. RADEGUND

By James M. Thunder | March 2009
James M. Thunder, a Washington, D.C., lawyer, was introduced to the story of Blessed Franz Jagerstatter as an undergraduate at the University of Notre Dame.

George Weigel has said that Pope Benedict XVI has been full of surprises. Just before Benedict arrived in the United States in April 2008, another observer, Fr. Raymond DeSouza, wondered whether Benedict would say or do anything that would surprise us as much as several other apparent “mistakes” he had made during his three-year papacy. Fr. DeSouza’s list of “mistakes” or “surprises” did not include the decree Benedict issued on June 1, 2007. This decree was indeed a surprise, and it is equally surprising that, in the ensuing year-plus, there has been precious little analysis of the import of this decree in light of world events.

On June 1, 2007, Benedict declared that Franz Jagerstatter had been a martyr for the Catholic faith. It was one of several papal actions on June 1 announced in a June 3, 2007, Vatican press release. The announcement simply stated that Jagerstatter was “an Austrian peasant who was guillotined in Berlin in 1943 for having refused any collaboration with the Nazis. He was 36, a husband and a father of three.”

Taken at face value, this decree appeared to be just another routine example of a pope making a ruling concerning the beatification or canonization of a Catholic. Outside observers might ask: Wasn’t Jagerstatter just another man among the millions killed during the Nazi era? Wasn’t it obvious to Jagerstatter’s contemporaries who had half a brain that the war the Nazis waged was grievously wrong? No and no.

Benedict’s decree allowed Jagerstatter, a native of St. Radegund, Austria, to be declared a “blessed,” one step short of a canonized saint. He was declared blessed in a ceremony on October 26, 2007. It was surrounding this event in October — not the decree in June — that some short biographical sketches of Franz appeared in the Catholic and secular press. Franz was clearly a devout Catholic — he was a sacristan who attended daily Mass — but no sketch answered the question of why his refusal to collaborate with the Nazis was a distinctively Catholic thing to do, meriting the appellation “martyr” for the Catholic faith. After all, the Nazis did not generally arrest or execute Catholics. Indeed, Franz himself was not arrested until he presented himself to military authorities, as he was ordered to do, and refused service.

Will the Secular Mass Media & Liberal Churchmen Try to Remove Benedict From Office?

Never mind opinion polls or the musings of talking heads on the nightly news; the Church has her own legal system already in place!

Robert Royal says, unlike some Catholics, he has faith in Pope Benedict -- but not when it comes to the Iraq War.

Easter has, for many years, been the season of choice for attacks on the beliefs…