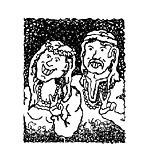 A TIME TO CHOOSE LIFE

I am going to state my views in pro­vocative form, in the hope of stimulating the broadest possible response.

A recent issue of New Perspectives Quarterly was devoted to the topic, “Superpower without a Cause,” and the articles in it, some of them by leading figures in the formation of American foreign policy in recent decades, show precisely the uncertainty that the topic suggests. This strikes me as bizarre and, worse, ominous. For in my view the cause for which this American superpower must work after the end of the Cold War is clear, if diffi­cult: peace. Most of the writers in the issue would dismiss that comment with, “of course, that is what we were working for all along.” Some of them might even quote Ronald Reagan about “peace through strength.”

But that is just what worries me: So much of the discussion of issues of international order and the control of violence essentially continues the language of the Cold War. But the Cold War was a war, not always so cold, in which tens of thousands of Americans, not to speak of hundreds of thousands of other nationalities, such as Vietnamese, lost their lives.

What we now need is a radical shift, a conversion, a word I use deliberately because it has a religious as well a secular connota­tion. We need a conversion, a metanoia, a turn­ing, from war to peace as our guiding princi­ple and cause. When I read last year that Congress was planning to cut the financing for the Strategic Defense Initiative by $1.6 billion, reducing President Bush’s request for $5.4 billion to $3.8 billion, and all for a project that never made much sense in the first place but now makes no sense at all, then it became clear that we have not made that turn, that we still think in terms of war, not peace.