Volume > Issue > On Taking the Kingdom by Force 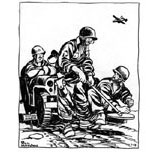 On Taking the Kingdom by Force

TO THE VICTORS GO THE SPOILS?

By William F.E. Mahoney | December 2012
William F.E. Mahoney recently earned a Ph.D. in theology at the University of Adam Mickiewicz in Poznan, Poland. He earned an M.A. in philosophy at the Fran­ciscan University of Steubenville, as well as S.T.L.s in biblical theology and dogmatic theology at the Angel­icum in Rome. He has taught at the high school and college levels and has worked in translation, editing, and writing. He is currently working with House of Gold Productions (www.houseofgoldproductions.com).

Many passages in the New Testament are easily and readily comprehendible, at least on a perfunctory level. Then there are those passages that are more challenging, require deeper reflection, and often lead to a plethora of questions. Finally, there are those passages that engage the inquisitive mind with that nagging question, “huh?” The first time I read the passage about the Kingdom of Heaven suffering violence, I asked this very question while scratching my head in a state of bewilderment.

The passage makes it seem like “men of violence,” who I assumed were the “bad guys,” were attacking and even usurping the Kingdom of Heaven. This seemed very strange and not in harmony with the rest of the New Testament. After studying this passage in greater depth, however, I came to appreciate it more and realized that my initial, unexamined synopsis was incorrect. This passage does in fact make sense, and Christ’s words here are in perfect conformity with the rest of the New Testament.

So, which is the proper translation? This is not the easiest question to answer, inasmuch as there are scholarly advocates for both possibilities. In the New International Biblical Commentary, for example, Robert H. Mounce prefers the passive voice, rendering the phrase “the kingdom of heaven has suffered violence.” He argues that the passage refers to violent men who had been trying to overcome forcefully the Kingdom of Heaven since the days of John the Baptist up until, and including, the days of Jesus’ public ministry. According to Mounce, these men are those like Herod, who incarcerated John, and those like the Pharisees, who were constantly challenging Jesus.

Yet A. Jones argues in A Catholic Commentary on Holy Scripture that reading this passage in the passive voice results in strained imagery and an idea foreign to the context. The context entails praise of John’s work and so the passive voice would be somewhat forced and require that this passage be understood as a parenthesis. The middle voice would make more sense within the context, Jones asserts, and thus from John’s initial preaching of the Kingdom’s proximity to Jesus’ establishing it, the Kingdom has been moving forward by “dint of earnest effort.”

This is all very interesting, but what is the proper translation? This Greek verb, biad­zomai, occurs only twice in the entire New Testament: here in Matthew and again in a more or less parallel passage in Luke. Perhaps the best way to solve this problem of translation is to consider Luke’s rendering, which the Catholic Edition of the Revised Standard Version translates in the following manner: “The law and the prophets were until John; since then the good news of the kingdom of God is preached, and every one enters it violently” (16:16; emphasis added). Here the verb in question is translated in the middle voice, and so as a consequence of the Kingdom of God being preached, people enter it violently — that is, those who wish to enter push forward forcefully against any opposition. Most, if not all, of the English Bibles give a similar translation, conveying the Greek verb in Luke 16:16 in the middle voice.

This, coupled with the context, weighs the balance in favor of the middle voice for Matthew 11:12. Consider that Jesus’ words are recorded as “men of violence take it by force.” He does not state that men of violence will try to take it by force but that they do indeed take it by force. Elsewhere, Jesus states clearly that the gates of Hell would not prevail against His Church (cf. Mt. 16:18), and so at least by analogy it would be nonsensical to assert that violent men — if understood to be the bad guys — could be successful in taking the Kingdom of Heaven by force. The inferior forces of evil are ultimately incapable of defeating the supreme forces of good.

Much of the difficulty in understanding this passage, therefore, can be attributed to a mistranslation of the text in English. What we’re dealing with here is not a bad translation, however, since it is certainly a possible one, but it is undoubtedly a mistranslation. It is rather odd that Luke 16:16 has been consistently translated correctly whereas Matthew 11:12 has been consistently translated incorrectly. Unfortunately, this passage in Matthew’s Gospel has suffered violence.

Why the Physical Resurrection of Christ Is So Believable

The Gender of the Holy Trinity

The Church is the true spiritual mother -- women are her symbol. We must also appreciate the true Fatherhood of God -- earthly fatherhood is the symbol of Him.