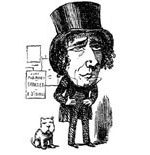 We have a problem with the notion that homosexuals who die of AIDS are “victims.” O.K., before the causes of AIDS were widely known, maybe many of them were victims. But now? Homosexuals are generally not dumb or ill-informed. They know about AIDS. If they persist in their “lifestyle” and get AIDS, they’re not “victims.”

The same goes for cigarette smokers. For decades we’ve known that cigarettes cause cancer. If you’re a cigarette smoker and you get lung cancer, don’t whine about how you’re a “victim” of the tobacco companies.

We say this knowing full well that the whining will keep coming, for victim status is highly coveted in our effete culture. On September 16, we were listening to the local CBS radio affiliate tell us about the mayor of a near-by city who had died. Died of what? The announcer solemnly intoned that the mayor was a “victim of suicide.”

Oh yeah? The only real victims were his stunned wife of 34 years and his three sons. The mayor was not a victim of suicide. He was a perpetrator of suicide, of murder.

You will notice that we said murder, not mere “killing.” The German language is pellucid here. Mord means murder whereas töten means to kill. Selbstmord means suicide, or literally to murder oneself, and Selbstmörder literally means a self-murderer. Can a murderer be a “victim”? Were the terrorists who slammed airplanes into the World Trade Center “victims”? We’ve never heard media announcers call them victims. But they too committed suicide — and for what they considered a very noble cause. Shall we be consistent and call them victims?

Big Sister Is Listening to You

The effects of linguistic re-ordering of priorities are far-reaching.