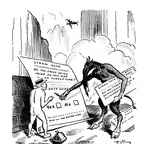 Lost Sheep in the Voting Booth

By Daniel J. Heisey | February 2009
Daniel J. Heisey, O.S.B., is a Benedictine monk of St. Vincent Archabbey in Latrobe, Pennsylvania, where he is known as Brother Bruno.

Much has been made in the journalistic analysis of the 2008 U.S. presidential election of why Catholic voters supported the candidate who was clearly not favored by most Catholic bishops. Various learned theories have emerged, but the reasons are really quite simple. The history of Catholics in the U.S. has been one of immigrants seeking to assimilate; meanwhile, among many of the lay faithful, the bishops as a group have lost credibility. Let us consider these two reasons a bit further.

In 1920 George Santayana wrote Character and Opinion in the United States. Santayana (1863-1952) was born in Avila, Spain, but had spent much of his life in Boston, teaching philosophy at Harvard. Although his own version of Platonism led him away from practicing his ancestral Catholic faith, he remained culturally sympathetic to Catholicism. In 1912 he retired from Harvard and eventually settled in Rome. Fond of irony, he was amused by Catholics in the U.S. “American life is a powerful solvent,” he writes in Character and Opinion in the United States, meaning that American life dissolves differences and resolves contradictions. “The American Catholic is entirely at peace,” he goes on to say, “his tone in everything, even in religion, is cheerfully American.” This cheerfulness beams forth even though “everything in American life is at the antipodes to” Catholicism, which Santayana describes as “ancient, metaphysical, poetic, elaborate, ascetic, autocratic, and intolerant,” a religion “full of large disillusions about this world and minute illusions about the other.”

As Santayana smiled wryly at these seemingly irreconcilable ideals, his former adopted home of Boston possessed his perfect specimen. The 1920s saw the rise of the Kennedy family, Irish Catholics keen on joining the ranks of the American Brahmins who could trace their Protestant pedigrees back to the Mayflower.

For many Catholics in the U.S., the Kennedys stood as glittering proof that they too could make it in their new country. Whereas Catholics were once seen as backward, illiterate, and superstitious, best relegated to row homes in factory towns or above coal mines, by the end of the 20th century they were fixtures at the highest levels of business and government. Moreover, unlike the Episcopal Church, the Catholic Church in the U.S. could not be described simply as “the Democratic Party at prayer.” One needed to look no further than such prominent Catholic conservatives as William F. Buckley Jr. and Russell Kirk.

We modern men and women are ambivalent about our bodies. We’re not sure if we…

The High Cost of Free Speech

Many high-profile tech leaders have been strong and generous backers of the effort to legalize same-sex marriage. Former Mozilla CEO Brendan Eich was run out of town for having donated a meager $1,000 to the opposition. Corporate culture still encourages a groupthink mentality.