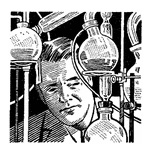 By Murray S. Daw | October 2009
Murray S. Daw is the R.A. Bowen Professor of Physics at Clemson University. He received his Ph.D. in Theoretical Physics from CalTech in 1981, and has worked in industry, government labs, and academia. He is a fellow of the American Academy of Arts and Sciences and the American Physical Society.

I would like to pose a question: Is the Catholic community retreating from an engagement with science? Many Catholics, scientists and non-scientists, seem to be unaware of the importance or the urgency of this question. It is popularly believed that there should be no relationship between scientific research and the imperatives of the faith. Yet who can deny the enormous and often deadly impact of modern science?

The chasm between science and Catholic culture is a problem not only for Catholic scientists, but also for the wider Catholic community. Pope John Paul II outlined the importance of this problem and identified many of its contributing causes in his 1998 encyclical Fides et Ratio. Since that time, countless seminars and discussion panels have praised the insights of the Holy Father. One must ask, however, if there has since been any real, substantive progress in the understanding and practice of science as it relates to the fullness of knowledge. In order to accomplish the aims laid out by John Paul, we need to move beyond the broad endorsements of Fides et Ratio and toward a fully integrated understanding of science. The proper integration of science into Catholic culture requires nothing less than a full understanding of how science relates to a complete view of faith, of the world, of life as a whole, even of existence itself. Sadly, the great majority of Catholics are unaware that such integration is even possible. Indeed, I assert that the chasm between science and Catholic culture has never been wider.

These difficulties are not confined to the Catholic community. In a very real way, our time and the surrounding culture may be defined by scientific and technological advances, and perhaps even more by the incoherent and confused responses to these advances. The very real crisis of culture that characterizes modernity has its roots in our understanding and use of science.

It is necessary that we Catholics realize that the solution can be found within the Church. The Catholic community can and should lead the way to a fuller understanding of all kinds of knowledge. And yet, modern Catholic culture is not even seriously engaged in, much less leading, the field of science. For centuries, Catholic scientists were to be found at the forefront of advances, but this is no longer true today. Catholic universities have, since their inception, proudly claimed the dual roles of researchers and teachers of science, but this too is no longer the case. Our institutions of higher education — even those that are faithfully Catholic — no longer express a clearly Catholic vision of what science is, how it should be researched, or how it should be taught. Instead, our most faithful institutions of Catholic higher education are shrinking their science curricula. Good, faithful Catholic college students who want to major in science are caught in a bind: There are very few places to study science within a truly Catholic curriculum.