Volume > Issue > Is a Return to Chivalry the Answer? 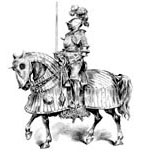 Is a Return to Chivalry the Answer?

By Jeffrey R. Jackson | March 2013
Jeffrey R. Jackson, 34, is a Rhode Island-based free­lance journalist and author of an upcoming book on male-female relations. In 2006 he completed the Robert D. Novak Journalism Fellowship. He is also a former fellow of The Phillips Foundation in Washington, D.C., a largely G.O.P.-aligned group from which he disaffiliated in 2007. He has served as a lead volunteer in the state's adult emergency and level-I trauma facility. Still a single man, he is certain of his eventual nuptial vocation.

Four decades into the global women’s liberation movements, Josef Cardinal Ratzinger issued a “Letter to the Bishops of the Catholic Church on the Collaboration of Men and Women in the Church and in the World” (2004). On the cusp of his elevation to the pontificate, the former prefect of the Congregation for the Doctrine of the Faith wrote that “much reflection has been given to the question of the dignity of women and to women’s rights and duties in the different areas of civil society and the Church…. The Church is called today to address certain currents of thought which are often at variance with the authentic advancement of women.” Specifically, these currents of thought concern the tendency to “emphasize strongly conditions of subordination in order to give rise to antagonism: women, in order to be themselves, must make themselves the adversaries of men. Faced with the abuse of power, the answer for women is to seek power. This process leads to opposition between men and women, in which the identity and role of one are emphasized to the disadvantage of the other, leading to harmful confusion regarding the human person, which has its most immediate and lethal effects in the structure of the family.”

The Church recognizes that the sexes are equal and complementary. Pope John Paul II delivered this philosophy with great effect in his series of talks on the “theology of the body,” his apostolic letter Mulieris Dignitatum (“On the Dignity & Vocation of Women,” 1988), his “Letter to Women” (1995), and even his encyclical Ut Unum Sint (1995), which depicts the Virgin Mary as iconic of the bridal Church.

Still, Cardinal Ratzinger’s concerns about the adversity and antagonism between the sexes do not exist in a vacuum. There are indeed profound social, economic, and spiritual consequences — a messy situation that has long concerned the Church. Notre Dame law professor M. Cathleen Kaveny cites Cardinal Ratzinger’s letter in America (Feb. 28, 2011), noting how the 1914 Catholic Encyclopedia states that “the sexes can never be on an equality as regards studies pursued at a university.” Even in 1914 the Church was concerned with the prospect of “opposition between men and women.”

Letters to the Editor: October 1983

Dorothy Day or Doris Day?... “Creationism” & the Church Fathers... Why Pick on the Swiss?... Ends in Themselves?... Tears of Sadness... Desire to Become a Catholic

Reviews of Earthen Vessels: The Practice of Personal Prayer According to the Patristic Tradition... The Decline and Fall of the Catholic Church in America by David Carlin... 'Cha' by Raymond A. Devlin, S.J.