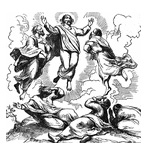 I Believe in the Life of the World to Come

By Abbot Joseph | January 2009
Abbot Joseph, a monk for 25 years, has for the past eight been the superior of Holy Transfiguration Monastery in Redwood Valley, California, a Byzantine-rite monastery of the Ukrainian Catholic Church. He is the author of two books, Joy Comes With Dawn: Reflections on Scripture and Life and How Lovely Is Your Dwelling Place: Lifting the Veils on the Presence of God, and edited and provided commentary for Prepare for the Kingdom: A Journal of Hope in the Face of Death by Laura Grossman. He blogs regularly on Scripture and the spiritual life at http://wordincarnate.wordpress.com. This article originally appeared in the Advent-Christmas 2007 issue of Gladsome Light (P.O. Box 217, Redwood Valley, CA 94570), the monastery's newsletter, and is reprinted with permission.

The past few months have given me plenty of opportunity for meditation on death. My good friend Laura and my Aunt Peggy have both died of cancer. As I write, my Uncle Thomas is in the advanced stages of cancer, and by time you read this he may very well have left this world. Several friends, acquaintances, and friends-of-friends have recently died as well. It is worthwhile, then, to reflect a bit on the final article of faith in the Nicene Creed, “I believe in the life of the world to come.”

Before I take it for granted, though, I should ask: Do you believe in the life of the world to come? If this question were asked fifty years ago in Western countries, there would have been a high percentage of affirmative replies. But in our present postmodern age, everything seems to be subject to doubt or disbelief. Books by atheists are making the bestseller lists, and traditional beliefs are almost universally scoffed at in the media and in academic and other “sophisticated” circles. God is seen as a quaint relic of an irrelevant past — tolerated, if at all, with a curious mixture of amusement and contempt. Man is the measure of all things; God is a concept that may be left to the realm of one’s subjective self-medication, as long as it is excluded from all serious public discourse and policy­making. By cutting ourselves loose from God, the secular prophets tell us, we have finally evolved. We have seen the light and have left the Dark Ages behind, no longer dependent upon the superstitious props of religion and its pie-in-the-sky hopes.

Since God has been run out of town, all beliefs and silly mythologies (like eternal life) must depart along with Him. All that’s left is the City of Man, the earthly project that history demonstrates is doomed to repeated collapse and rebuilding and collapse. The new Tower of Babel is under construction. We can design our future, redesign our own species, and create more refined and effective means of obliterating that species from the face of the earth.

Let’s hear what we can expect after a life of human accomplishment in this brave new godless world, from one of the most famous and outspoken atheists of the past century, Madalyn Murray O’Hair: “There is no God. There’s no heaven. There’s no hell. There are no angels. When you die, you go in the ground, the worms eat you….” A deceased human being, O’Hair wrote, was nothing more than “a fallen leaf from a tree, a dog killed on the highway, a fish caught in a net.” That is the glorious conclusion to our bright and wonderfully evolved existence.