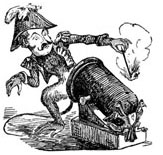 DOING BAD ON THE WAY TO THE GOOD

By Andrew Messaros | March 2005
Andrew Messaros is a former professor of biology at Ave Maria College in Ypsilanti, Michigan, and currently a professor of neuroscience at The Medical College of Ohio in Toledo. (This is the NOR's fifth and final installment on Thomas Monaghan and his Ave Maria institutions.)

A tag-team developed in response to my NOR articles (Sept. 2004 and Nov. 2004) on the problematic administration of Ave Maria College (AMC) in Ypsilanti, Michigan, and Ave Maria University (AMU) in Naples, Florida.

My September piece challenged billionaire Thomas Monaghan on his self-orchestrated conflict-of-interest relationship as principal “donor” and Board Chairman for AMC Michigan. Monaghan did not reply. Instead, he apparently decided to send the President of AMU Florida, Nicholas Healy, who responded by reviewing the short and undistinguished history of AMU (NOR, Oct. 2004). I corrected Healy and brought the focus back on the Michigan College by documenting how AMC Board decisions made solely to benefit Florida came at the expense of long-lasting harm to students and employees in Michigan, including my own career and family (Nov.). Healy did not reply. Instead, he apparently decided to send Fr. Joseph Fessio, the Chancellor-turned-Provost of AMU Florida, who responded with an insolent characterization of me as whining, petty, sloppy, careless, double-minded, reckless, willfully dishonest, intellectually dishonest, and a poor scientist to boot (Jan. 2005). Did I mention dishonest?

Being the embodiment of so many repulsive characteristics in Fessio’s mind, I think it is safe to conclude that my progeny will never be offered scholarships to attend AMU Florida. That’s fine; I wouldn’t risk having them go there anyway. No amount of institutionalized orthodoxy, external piety, or Vatican choir visits could convince me to entrust the education of my children to administrators such as Fessio who so cavalierly dismiss the legitimate and significant concerns of employees, parents, and students as “petty criticism,” while bulldozing his way toward some “educational mission.” At the administrative plate, Fr. Fessio’s batting average is so far zero for two in keeping highly promising orthodox Catholic colleges open (Campion College is already defunct and AMC will soon be). Will AMU be next, making him zero for three?

The January 2005 NOR article is typical Fessio — brash and unapologetic. If I were a mere passerby to the Ave Maria story, I’d probably think, “You da man, Fessio! Go get ’em!” The Rosanne Barr persona that he seems to relish does have a certain value — at least to impressionable students, and adults and donors who don’t work with him. But there are times when the Battler Priest image becomes immature and self-defeating — when it is directed at fellow orthodox Catholics who are equally committed to the renewal of Catholic higher education as he is, but question the tactics used by a handful of administrators in achieving that goal. Fr. Fessio chose not to use his pastoral vocation to initiate, much less mediate, a charitable resolution to this baleful imbroglio. Instead, he chose to play the role of insult comic.

Fr. Fessio’s “bring it on” public image appears to be merely that, a signature image, if now somewhat tattered, to dazzle the public. In reality, he has gone to great lengths to suppress facts surrounding the mismanagement of Ave Maria enterprises.

Letter to the Editor: February 1998

Even the Calendar "Offends"... Nothing Sacred About My Cardinal... Those Wonderful (Banned) Ads...

Now that the 50th anniversary commemora­tions of D-Day are over, perhaps it is well to…