Volume > Issue > For Whom the Bells Toll Not 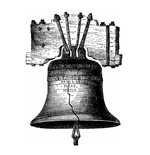 For Whom the Bells Toll Not

When I awoke as a boy, it was always to bells; first to the slow, dipodic clanging of the switch engine bells on the Norfolk and Western Line, the main yard of which ran past our house and carried millions of tons of freight and coal, troop and passenger trains, and shrouded armaments for war. No matter the time of day or night, the bells were there, a part of consciousness as sure as the fog and drizzle of the Appalachian valleys. Then, from the Spanish gothic bell tower of Sacred Heart, the lesser bell rang out the Angelus, serving notice to the world that the Word had become flesh and dwelt among us, calling us to kneel and pray. At Mass the triple hand bells I rang insisted on the greatest happening in the universe, and they echoed in the stone of the sanctuary, a place where bells said, “Awake! Awake to these Mysteries!” At Easter, when the Gloria was sung for the first time since Ash Wednesday, we rose exulting as two bell-ringers were lifted off their feet, pulling hard on the bell ropes, and the great bells pealed out the news that He is risen. On school mornings, Sister Innocentia stood in the school door and rang the large hand bell, which must have reminded her of school and her own youth in Germany. And, a special memory: One morning my mother and I were on the way to church when every train and church bell (and steam whistle) sounded together. I looked to her in fear and amazement; she explained through her tears, “The war is over!” Bells permeated my existence then: life meant bells; church meant bells; bells called me to the mystery of things.

A world without bells was unimaginable, but in the grim modern process of unimagining, the unimaginable happened when I wasn’t looking. The railroad locomotives and their bells disappeared, to be replaced by the rude blatting of diesel horns; and churches gave up their real bells for electronic chimes. Bell towers were abandoned as unsafe or primitive, and new suburban churches simply ignored 1,500 years of Church history, from the times when the monks of Ireland marked the liturgical hours first with hand bells and then with larger ones, which they had to bury when the Danes came. From something like cow bells — which have also mostly vanished, soon to be replaced by microchips — the monks’ hand bells developed into the great cast bells that began to define the sacred time of Europe and beyond. Then, for more than a thousand years, Europe was not only the Faith, it was the daily sense of the hours marked by prayer, and even the humblest of churches strove to have the best and most melodious of bells. Bells meant prayer; bells meant the holy; bells meant the Church universal; and more, to borrow a phrase from Belloc, they meant “the physical network upon which the soul depends.”

Testimony to that need is ancient. Human beings have been striking wood and metal as far back as known, doubtless for various purposes, but most often in connection with religion. Some of the bells from the Orient seem clunky and have little tone. Apparently, the first hand bells used by Irish monks were little more than cow bells. But monasticism, as it came out of the desert and into Europe, required larger bells, and a proud art of great sophistication grew. At present in the West, only a few major church bell-makers exist, mostly in Poland and Russia, though Verdin’s and McShane continue the tradition in the U.S.

When one reads the history and literature of the Christian West from the sixth century onward, one is struck by the omnipresence of bells. As bell-making grew with Christian art and architecture, bells grew larger and the making of many great tones required both wizardry and tonnage, until the point that a bell commissioned by the Tsars weighed 220 tons, and required a warning before it was rung to keep the populace from thinking the apocalypse was upon them. (By comparison, the largest church bell in the West, in Cologne, weighs 27 tons; the great bell of St. Peter’s, nine tons). Simultaneously, through the cunning of metallurgists, bells were developed to exact tones, and groups of bells became veritable orchestras. Bell-ringers became prized as artists, and were even invested with the minor order of ostiarius. Today, here and there, the great bells ring out the monastic hours with soul-moving force, as at Abbaye Fontgombault, where the Benedictines keep the ancient rule and liturgy, prompting one visitor, then-Cardinal Ratzinger, to say, “Now that is the Catholic Church!”

The Smoke of Satan in the Vatican?... The Timing Is Just Too Perfect

When looking for definitions of justice, I prefer the older men: Aristotle, Thomas Aquinas, Locke and Moses.

Letter to the Editor: November 2005

Not a "Bad Christian," After All... "The Church in Her Wisdom"?... Love It or Hate It, I Can't Put It Down... Brom's Execrable Groveling... Saddam Moved His WMDs to Syria... What Should Prolifers Do?... Lamont Flawed on Moral Theology