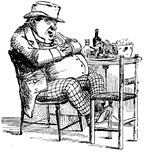 COULD I REALLY GO NINE DAYS WITHOUT FOOD?

I am fortunate to number among my friends a man of great spiritual insight. This is all the more unusual given his background. He is educated (with degrees from Notre Dame and the Franciscan University of Steubenville), married with a large family, and has worked as a teacher, educational administrator, and banker. He is also a walking medical miracle, having survived several bouts with cancer, and he has that rare ability to bear great suffering without complaint. Despite all this — or perhaps because of it — he has the kind of spiritual insights typically associated with cloistered ascetics.

As such, when he talks, I listen.

Back in 2009, after recovering from complications following three bouts of cancer, my friend stumbled across a book in his local drugstore that was to prove very influential in his spiritual life — and mine. Titled The Fasting Edge, it is a popular Christian work by a Protestant pastor named Jentezen Franklin. Careful and faithful study of Scripture made Franklin aware of the fact that every single major figure in the Bible is described as fasting at some point. And yet, fasting is an almost unheard-of practice in our day. If faithful Christians are supposed to be following the example of Scripture, and if every major figure in Scripture is described as fasting at some point, why wasn’t Franklin? From that point forward, he made the practice of fasting — and witnessing to it — an integral part of his ministry, and he has since written several more books on the subject. Franklin and his congregation have become so committed to the practice that they now try to go without food for a full 21 days each January.

My friend was captivated by Franklin’s witness and spent the next few years learning the practice of fasting, integrating it into his spiritual life, alongside all the other demands of work, family, and frequent illness. I suppose it was in obedience to the biblical injunction not to broadcast your fast (cf. Mt. 6:16-18) that he never told me he was doing this, until a fateful day a few years ago when he first broached the topic with me in conversation, touting the benefits of fasting and all it entails.

“You know, Chris,” he casually mentioned once, “after I’ve been fasting for a novena —”

“Stop right there,” I replied. “A novena? A whole novena? Nine straight days? You can’t go that long without food!”

Oh, how little I knew!

Milton on the Monday After Easter Break

(That’s by my watch which nowadays

Bush's military isn't reconsidering the feminist experiment devised under Bill Clinton; it is completing it.

I have confidence in the general form of government established by the American Constitution, and…