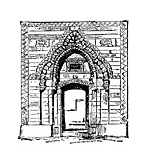 ENTER BY THE NARROW GATE

More and more frequently in our New Age culture we hear the phrase “faith journey.” Individuals are described as on a lifelong “faith journey” to either God or “The Force” or a Big Guy in the Sky or some great beyond. It seems that supplying details concerning that “journey” is not necessary and that required actions or specific beliefs are irrelevant. Three examples demonstrate.

A couple of years ago the owner of two “gay bars,” which were apparently used for pornographic filmmaking, was denied burial in the Catholic churches of San Diego, California. The rector of an Episcopalian church jumped in with self-proclaimed “love and compassion” to offer his cathedral for the bar owner’s funeral services. During the ceremony he asserted that the recently deceased was on a “faith journey” and that no one should judge his actions since we all are on our way to God, and presumably Heaven.

The second example involves two young people who ignored Catholic doctrine by shacking up together for a couple of years and begetting one child before finally deciding to tie the knot. Resplendent in her white wedding gown, the bride heard the priest tell the assembled that these two (really three by now) were on their own “faith journey,” and they were now on the right track. These “faith sojourners,” however, never went to church before or after the ceremony, currently receive none of the sacraments, and are not raising their first or second child in the faith. These individuals are, indeed on a journey. But faith, especially the Catholic faith, has nothing to do with that journey.

The final example of where the term was used to simply excuse behavior not at all consistent with Catholic principles dealt with the untimely death of a friend of a friend of this author. The deceased had abandoned his religion some thirty years before his death, married outside of the Church, raised his children with no faith, and referred to himself as a “recovering Catholic.” His orthodox Catholic parents tried to console themselves by stating that there are many ways to God, and their son’s “faith journey” was roundabout. It defies imagination just how anyone with any sense of objectivity could agree with that assessment. An individual who thumbs his nose at the Catholic religion for all of his adult life can hardly be described to be on any sort of journey of faith. Comforting sentiments, yes; truthfulness in terms of reality, no.

Victim status is highly coveted in our effete culture.