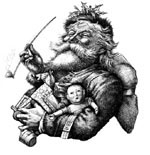 Enjoy Christmas — While It Lasts

By John F. Gaski | December 2014
John F. Gaski is an associate professor at the Mendoza College of Business at the University of Notre Dame. A longtime but former registered Democrat, he is the author of Frugal Cool: How to Get Rich — Without Making Very Much Money (Corby Books, 2009).

Once again, as is becoming a tedious ritual at this time of year, our country’s legal and political institutions are wrestling with the “separation of Church and state” — or at least one highly visible aspect of it. This particular struggle even has a name, “the war on Christmas.” In the spirit of the season, I have some questions for those who believe that such subversive displays as public nativity scenes and Christmas trees, or even the Christmas holiday itself, constitute an intolerable commingling of Church and state.

The birth of Christ is celebrated as a national holiday, a federal holiday, just like the births of George Washington and Martin Luther King Jr. So why is the public representation of one national honoree, Jesus Christ, more objectionable than publicly displayed images of others, such as Washington and King? Why can’t such Christmas displays be interpreted, justified, and accepted in terms of their established secular aspect, which is the commemoration of a significant historical event and figure, rather than anxiously construed as an official endorsement of a specific religion? Is the federal celebration of Protestant minister Martin Luther King Jr.’s birthday also to be considered a governmental endorsement of the particular religious organizations he represented (including the Southern Christian Leadership Conference)?

Recognition of the civil orientation of the Christmas holiday, and a bit of wisdom and toleration, would obviate the need for the bizarre legal remedies now being undertaken, such as those based on the ratio of religious icons to the number of non-religious icons like snowmen, elves, and reindeer in a public display. Yes, the courts have actually mandated such formulae!

For some, however, that does not go far enough. Numerous public schools now prohibit even Frosty the Snowman decorations and candy canes because they are “Christmas symbols” and therefore somehow construable as relating to religion. A transparent motive for many schools is the justifiable fear that the ACLU or the Freedom From Religion Foundation will levy a lawsuit against them.

Officers of the New Regime

When ordinary folks like your son, your wife, or your grandmother agree with the Harassment Specialists and Chief Purpose Officers, then the political is personal.

If it's offensive to print Cleveland Indians, then it's even more offensive to make reference to the state of Indiana.