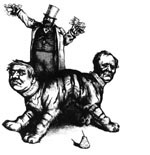 Dreams of a Perfected Beehive

By Robert Lowry Clinton | November 2015
Robert Lowry Clinton is Professor and Chair Emeritus in the Department of Political Science at Southern Illinois University Carbondale and Adjunct Professor of Political Science at the University of Missouri St. Louis. He is the author of Marbury v. Madison and Judicial Review and God and Man in the Law: The Foundations of Anglo-American Constitutionalism (both published by the University Press of Kansas), as well as numerous articles and book chapters. His articles have appeared in The American Journal of Political Science, Political Research Quarterly, The Journal of Supreme Court History, The American Journal of Jurisprudence, First Things, Public Discourse, Crisis, and National Review, among others.

James V. Schall, S.J., in his article “Will Modernity Mean the End of Catholicism?” (NOR, Nov. 2014), lamented the fact that a “Catholic moment” in which “the truths of the faith would be acknowledged in the American public square” failed to occur in the aftermath of the Second World War. Surely this would have been an opportune moment given the heightened awareness of man’s propensity for evil in the wake of Nazi atrocities, and the revival of natural-law thinking among some Catholic (and non-Catholic) intellectuals. Fr. Schall rightly pointed out the stark conflict between Catholicism, which is grounded in an historical understanding of rational human nature (“what man is”), and modernity, which is grounded in a relativism “in which man himself could and should be other than what he is.” Fr. Schall also rightly noted a sharp contrast between two versions of the American founding, one of which is grounded in the principles of the American Revolution, the other of which finds its inspiration in the principles of the French Revolution. Fr. Schall explains:

The early Americans, along with their actual new-world political experience, knew Scripture and the classics. They were aware of modern history to their time as well as the modern authors. As things developed, they understood that their revolution and that of the French were radically different. Whether they remain that much different from today’s perspective is an issue we must address. The principles of our present republic are inching closer and closer to those of the French Revolution, and further and further away from those of the American Revolution.

As a result, according to Fr. Schall, “The nature of the American founding seems rather moot. It is not what governs this country; few seem bent on recalling it with any real chance of success.”

It is difficult to deny the ring of truth in Fr. Schall’s remarks, especially in the wake of the Supreme Court’s 5-4 decision in Obergefell v. Hodges, in which the Court ruled that state laws defining marriage as a bond between one man and one woman violate the Fourteenth Amendment of the Constitution. Chief Justice John Roberts, dissenting from the ruling, noted that many Americans will celebrate the decision for a variety of reasons, and then he warned: “But do not celebrate the Constitution. It had nothing to do with it.” This is a startling statement, for here the Chief Justice of the U.S. declares that his Court has just made an historic constitutional decision that has nothing to do with the Constitution! Perhaps it is time to catch our breath and take stock of where we really are in the process of American constitutional development, so as to see how we got from the founding to Obergefell.

The Pope's Incoherence... The Pope's Champion... Don't Panic... An Insurmountable Need... Mass Democratization as a Force of De-Civilization... No Love for Latin... and more

A Bishop With Testosterone

Would that all bishops followed the lead of Robert F. Vasa.