Volume > Issue > Can a Return to Augustine Resolve the Current Educational Crisis?

Can a Return to Augustine Resolve the Current Educational Crisis? 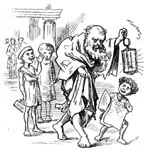 On Education, Formation, Citizenship and the Lost Purpose of Learning

K.F. Stewart is a retired high school and college teacher who currently resides in the Willamette Valley, Oregon. His published books include Kings of the Ancient World and Christian Contemplations: Living Today for Jesus.

In 2013 George Fox University in Newberg, Oregon, hired a young academic to create, direct, and recruit students for its new William Penn Honors Program. This was Joseph Clair’s first academic appointment. A graduate of Wheaton College with a Ph.D. in religion from Princeton, he had used the interval between those degrees to earn master’s degrees from Duke, Fordham, and Cambridge. Now, in 2018, the premier Honors Program students receive their own bachelor’s degrees. Not coincidentally, this year also marks the publication of Clair’s second book, On Education, Formation, Citizenship and the Lost Purpose of Learning. It is the fourth in Bloomsbury’s Reading Augustine series, edited by Miles Hollingworth, an Augustinian scholar who holds appointments in universities on both sides of the Atlantic.

Clair’s teaching at Fox led directly to On Education. His Acknowledgements closes with this dedication: “To the extraordinary students of the William Penn Honors Program who taught me how to be a teacher, to you I dedicate this book.” These “extraordinary students” undertake six six-credit-hour courses — four as underclassmen and one each during junior and senior year, with a three-credit Integration Thesis during senior-year spring semester. These courses fulfill all general education and distribution requirements. In the fifth and final chapter of On Education, Clair calls these classes and their required readings “pre-disciplinary.” Understanding these as readings directed to the generally well-educated individual, Clair adds that it is these readings, and the conversations stemming from them, that create the well-educated individual. In his third chapter, “The Art of Reading,” Clair cites Augustine to explain how this occurs, the readings providing the exact words by which to name and describe the reader’s own self. Clair sees his students coming to understand who they are in the world by means of these readings, an antidote to the intellectual and moral collapse besetting the entirety of higher education in the West.

This academic shipwreck has been evident at least since the publication of Academically Adrift by Richard Arum and Josipa Roksa in 2010 — although, sadly, many university administrators and professors remain clueless, however tightly their feckless hands grip the ship’s tiller. What distinguishes Clair’s approach from others is that in Augustine he finds a coherent response to chaotic modern education, not merely an eclectic, arbitrary borrowing of ideas, procedures, and texts from earlier, allegedly happier, times. Augustine is relevant, Clair argues. At the turn of the fifth century, the social and cultural structure of Rome still stood, but the incessant tramp of both barbarian and Roman feet generated disconcerting vibrations in Roman floors, testimony to the growing dry rot in pillars and beams. It is difficult not to draw parallels to the West in these early years of the 21st century. How, then, to adapt Augustine’s insights to the teaching of a university’s pre-disciplinary courses is the theme of Clair’s book.

To read On Education is to see Clair’s long list of academic degrees not as a professional student’s collection but as the sine qua non for writing the book. He invokes writers of various times and cultures to affirm what he is doing now at Fox. The title of the book itself and its first chapter evoke Dorothy L. Sayers’s 1947 Oxford address, “The Lost Tools of Learning.” Clair’s arguments range across thoughts and analyses from Seneca and Montaigne to Emerson and Thoreau, grounding his assertions in the observations and prescriptions of earlier humanists. Clair notes that every educational program necessarily must answer four questions as to purposes: intellectual (what should I know?), economic (what will I make?), moral (what should I do?), and spiritual (who or what should I worship?). No educational system chooses questions to answer or to ignore; the answers come, called for or not.

That, says Clair, is not enough. The purposes must themselves be held together by the frame of religious faith. Clair retrieves from Augustine’s thought a picture of faith blurred nowadays in the sight of many Christians. Faith is not primarily assent to propositions about God and His universe; faith means sharing a relationship with our Creator-God. Clair traces the development of that understanding in chapter two, “Education and the Order of Love.” Rightly ordered love, Clair says with Augustine, means first the inward ordering of the soul’s love for itself; second, the upward ordering of our love for God; and third, the outward ordering of love for our neighbors. A proper education enables us to fulfill the Great Commandment, loving God with all our heart and our neighbors as ourselves.

Clair’s first book was Discerning the Good in the Letters & Sermons of Augustine (Oxford, 2016), and here he returns to the Good and the Two Cities image Augustine developed in City of God. Clair notes the innate American antagonism between the two coasts and “fly-over country,” between a globalist mindset and the nationalistic populist response. With Augustine he sees in all human endeavors both the City of Man and the City of God, each simultaneously working out its own ends. That recognition keeps us from the workers’ error in Jesus’ parable, wanting to uproot all the tares right now. It is too easy to confuse tares and wheat. Recognizing that our apprehension of the Good is provisional and contingent tends toward resolving political and moral tensions in our country. Indeed, it was only with the abandonment of Augustine’s views on education and the Two Cities that this societal crisis could develop.

Re-engineering education requires societal buy-in. Clair offers three goods for sale. His “great books” curriculum is not limited to Mortimer Adler’s Great Books. The criterion for a text’s inclusion demands that it call and speak to the reader’s inner self. Adler’s Great Books can make the cut, but others, non-Western or contemporary, could be included too. The Honors Program readings include The Confessions of Al-Ghazali: Rescuer from Error, Lao Tzu’s Tao Te Ching, The Bhagavad Gita, and Gandhi’s Autobiography: The Story of My Experiments with Truth. Additionally, professors, administrators, and the general public must understand that teaching pre-disciplinary materials in a conversational format is a separate academic pursuit from the recognized professorial fields.

After considering that need, Clair addresses financial costs. This training is cheap to the university in terms of the materials required — no nuclear reactors or orbiting space telescopes needed — but hugely expensive in terms of the individual’s time. Clair’s own years as a student occupied a decade after leaving Wheaton; he suggests that this would not have been possible without generous patronage, and he audaciously urges that more patrons arise to help.

Return to an Augustinian education might resolve the current educational crisis, but challenges remain. This program’s unity is a function of its reliance on Augustine. Clair speaks wholly from within that tradition, in one sense almost as if the 19th and 20th centuries had not happened, and yet he is cognizant of the contemporary world. But the program has a chance of acceptance only in overtly Christian colleges and universities, and perhaps not in all of those. The decline in college admissions, for whatever reason, has been frequently remarked. It may be, as Clair thinks, that a strong pre-disciplinary liberal arts program can allow some Christian colleges to continue their presence and work in the community. Will the growing development of low-cost alternatives to a traditional four-year residency look better? Colleges contemplating the Augustinian solution must consider justifying their program to the accrediting institutions. Those challenges cannot be clearly assessed, let alone addressed, until the decision is made to implement Clair’s proposal on a wider basis.

Will this approach work? It appears so. Among the Honors Program’s first class of graduates, one noted on Facebook in December 2017, “This semester I’ve written 125 pages and read 40 books (about 3 a week).” The disparity with workloads of college seniors elsewhere is evident. Why do they work so hard? Even the briefest random conversation with students evinces the deep respect, bordering on reverence and love, with which they regard Joseph Clair. To sit as a guest in a class discussion led by Clair is to understand why this should be so: His love for and commitment to his students is manifest in the way he conducts the class and interacts with them individually. What these students see here is a living example of that right ordering of love — inward, upward, and then outward to one’s neighbors — which Clair discusses in the book. Here they find assurance of the promise in Luke 6:40: “Everyone when he is fully trained will be like his teacher.” When Clair describes these young men and women as “extraordinary students,” it is because he has led them to that point. And there are whispers of other places where such victories occur, small hands doing them because they must.

The Secularizing of Catholic Universities

Catholic academics betrayed the faith with the Land O'Lakes Statement in 1967, which has spread error throughout the Church ever since.