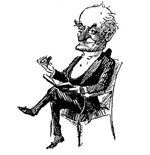 By Carl Sundell | April 2012
Carl Sundell is Professor Emeritus of English and Humanities at Quinsigamond Community College in Worcester, Massachusetts. He currently resides in Lubbock, Texas.

During the Catholic Middle Ages, an atheist was difficult to find. But since the time of Martin Luther, Christianity has endured a deepening crisis, and the Western world is experiencing a chronic surge toward atheism. European national leaders of today are reluctant to declare for the record that modern democracy has its roots in the Christian faith. In the U.S., despite abundant historical evidence to the contrary, humanist pundits boldly deny that many of our nation’s founding fathers were Christian. The Catholic Church and mainline Protestant groups are struggling to retain members. According to a recent study, thirty-four million Americans no longer affiliate with any religious group. In light of these mounting challenges to our religious heritage, a review of atheism’s recent history is in order.

Born into a Catholic family, the French existentialist philosopher Jean-Paul Sartre (1905-1980) was arguably the most famous atheist of the twentieth century. A fatherless rebel in his youth, he declared himself an atheist by his fourteenth birthday. Suffering from a wounded ego (his own mother found him to be ugly), he compensated by attending the most prestigious colleges and building a reputation as a controversial intellectual. In addition to his complex philosophical works, he was a novelist, playwright, literary critic, biographer, and journalist, offering the last of these talents in the service of communist ideology. Proud of his intellect, Sartre boasted, “I’ve got a golden brain.” He turned a blind eye to the atrocities of Stalin and sought to advance various Marxist principles. Perhaps alone among his communist colleagues, he defended the principle of free will. Sartre refused the Nobel Prize for Literature in 1964 (the first to do so) but later unsuccessfully petitioned for the cash award that went with the prize.

Sartre regarded man as a “useless passion.” His play No Exit and his novel Nausea by their titles alone suggest the sense of struggle with reality that he believed a true atheist must confront. Sartre’s most famous line was: “Hell is other people.” The American “beatnik” generation of the 1950s, with their black berets, smoke-filled coffeehouses, and gloom-and-doom poetry readings, were a tribute to the charismatic influence of Sartre among the younger intellectuals of the day. Throughout his later years, Sartre increasingly seemed to identify with the far Left and any kind of revolutionary movement. However, months before his death he was observed to take an interest in Judaism and the messianic idea. According to his friend Benny Levy, who interviewed him several times during his last weeks of overwork and declining health, Sartre ceased to be an atheist.

Ayn Rand (Alice Rosenbaum; 1905-1982) was a Russian Jew born during the reign of the last czar. It appears that she became an atheist at the age of thirteen, about the time of the Bolshevik Revolution, after which her family was persecuted and Rand narrowly escaped to live with relatives in New York City. She quickly mastered the English language and became a playwright, screenwriter, novelist (The Fountainhead, Atlas Shrugged), and controversial founder of a philosophical system called Objectivism. Rand’s entire worldview rests on her absolute belief in the power of reason, and reason alone, to bring about truth and human happiness. For Rand it was irrational that a man supposedly so perfect as Jesus would sacrifice Himself for creatures so far beneath Him in worth. Like so many atheists, she regarded the Catholic Church as the greatest enemy of free thought and therefore of human happiness. Curiously, her pronouncements on most subjects read as if they were written with infallible self-assurance; nor would she hesitate to treat as heretics those followers who disagreed with her.

Hell as the Atheist Heaven

Who could have imagined that Richard Dawkins, the foremost public atheist of our day, would…

There are two schools of thought about whether atheism is advancing throughout the world. One…