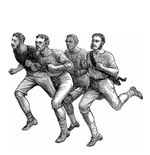 The summit is in view. We’re getting closer, but we need your help to reach the top.

Since last November we’ve been trying to raise $165,000 to restore order to our financial house and to withstand the losses we’ve suffered this year publishing a small, independent Catholic magazine. We are pleased to report that, as of this writing, we have raised $156,515. We’re almost there. We’ve only got another 8,485 steps to go.

The surest way to financial health is to increase our readership. Raising funds on a one-time basis helps only in the short run — unless we are able to convert the funds into new subscriptions. (Besides, it is the nature of a nonprofit to recycle funds back into the operation, not to siphon them off into the pockets of officers. The NOR is run like a true nonprofit.) To that end, although we haven’t yet met our fundraising goal, we have already gone full steam ahead with new projects aimed at increasing the number of NOR subscribers.

The first step we took was to mail a “come back” letter to former subscribers whose subscriptions had lapsed. We have heard from so many of you that the NOR is better now than ever before. Surely, we thought, others might find it so as well. The letter, mailed in June, described the orthodox renewal taking place both in the Church and at the NOR, and why now is a great time to be a Catholic — and a great time to read the NOR. We made special mention of the great writers who have appeared in our pages in recent issues (those mentioned in our November 2009 and May 2010 editorials, and those mentioned below). Thus far, the come-back mailer has helped return a good number of readers to the fold. We welcome back those of you reading this who have recently renewed. We hope you find the NOR to be fruitful reading.

All the rules and regulations of Catholic life are a map that's been corrected and refined by traveler after traveler for hundreds and hundreds of years.

To denounce sin is, of course, to risk it in no small way — the…