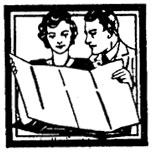 By Francis Canavan | September 1996
The Rev. Francis Canavan, S.J., is Professor Emeritus of Political Science at Fordham. His latest book is The Pluralist Game.

A film entitled The Spitfire Grill has just been released. We have a fascinating insight into the secular liberal mind in two reports on the film after it was shown at the Sundance Film Festival in Utah. Both reports were written by Caryn James and published in The New York Times on Saturday, February 3, and in that paper’s “Arts & Leisure” section on the following day.

The big news, according to the headline on the first report, was “Film Financed by a Religious Group.” The Spitfire Grill won the festival’s Audience Award for drama. But few in the audience knew that the film had been financed by a religious group. Worse yet, the group was a Catholic religious order, the Priests of the Sacred Heart. But Ms. James knew, and she dutifully sounded the alarm.

Gregory Productions is the name of the company that financed, produced, and marketed the film, and it is wholly owned by the religious order. “Some executives in Hollywood are uneasy about the church’s connection with the film and what they see as Gregory’s religious agenda,” says Ms. James.

A See of the Second-Rate

The norm among the men who wear miters — men who are supposed to possess powers of discernment — appears to be gaffes, ill judgment, and an apparent blindness to reason.