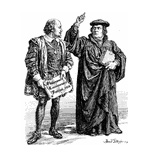 IS THERE SUCH A THING AS 'MERE CHRISTIANITY'?

By Peter Kreeft | December 2017
In July-August 1994, Peter Kreeft was Professor of Philosophy at Boston College and a Contributing Editor of the NOR. His two most recent books were The Shadow-Lands of C.S. Lewis: The Man Behind the Movie and (with Ronald K. Tacelli) Handbook of Christian Apologetics.

Ed. Note: Throughout 2017, in commemoration of our 40th year of publication, we are featuring one article per issue from the NOR’s past. This article originally appeared in our July-August 1994 issue (volume LXI, number 6) and is presented here unabridged. Copyright © 1994.

The scene: C.S. Lewis is sitting alone late at night at his big oak desk at The Kilns, Oxford, writing Mere Christianity, his little masterpiece that is destined to enlighten millions of minds and help convert countless souls. He has written everything except the Introduc­tion. (Good authors usually delay their Introductions for the same reason good matchmakers do: They first have to get to know what they are to introduce.)

Lewis suddenly sits up with a start. He seems to see two visitors in his room. He rubs his eyes, but the two visitors do not disappear. One is a very large, very fat Dominican friar, white-robed and tonsured, appar­ently in a fit of absent-minded abstraction. The other is a black-robed Augustinian monk, only a little less for­midably fat, who is fanning his fanny with his robe. He has apparently just passed wind. He mutters: “When I fart in Wittenberg, the Pope smells it in Rome.”

Lewis’s first thought is that there are four possi­bilities: These two creatures must come from Heaven or Hell or Purgatory or Central Casting. Then he thinks a fifth possibility more likely: They come from his own imagination. He will never settle this ques­tion in his mind with certainty, though he will enjoy conversation with them that is so lively that it makes the fifth possibility unlikely.

They speak English, but with accents. Lewis can’t help associating the Dominican’s accent with the Mafia and the Augustinian’s with the Gestapo. By an effort of will and charity he exorcises these thoughts, and he is rewarded by divine providence in that the two figures do not disappear, but speak.

Luther: What are you writing there, Brother Jack?

Luther: That habit you have of answering a ques­tion with another question — are you a rabbi or a psychiatrist?

The lions were restless. Restless and hungry. They…