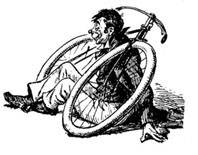 A Nation of Mr. Magoos Stumbling Into Serious Trouble

One evening as my wife and I were strolling in West Los Angeles we saw a young man sitting on a curb. He was slashing his wrists with a razor blade. After attempting to talk with him, another man and I grabbed his arms and forced him to the sidewalk. My wife ran to phone 911. Minutes passed, and as we grew tired the would-be suicide, still brandishing his blade, almost overcame us. After about 15 minutes, I heard a squeal of brakes and eased my hold a bit, thinking the police were there to take over. But it was only a parking officer, who radioed in another call but did nothing else. After more endless minutes an ambulance arrived. By this time the young man was weak from loss of blood, and he allowed himself to be packed off. No policeman ever came.

My relief at that authoritative squeal of brakes — and my feeling when it proved to be a meter maid — can be imagined. In the renewed struggle to keep the razor-wielder from hurting himself and us, I had little time for introspection, but later, resting my aching arms, I could savor just how little comfort it had been to me to have a uniformed officer of the law standing by fully prepared to protect me from double-parkers and meter violators. As a taxpayer, I am aware that sending out police officers costs the city money while sending out parking officers makes the city money. But full municipal coffers, though a good thing, were not what I needed as I struggled there on the pavement. A principle began to take shape as I mulled over the insight I gained that evening: How often we stand ready and willing to address minor matters — when it is major matters that we must come to grips with.

Sexual harassment is a problem, we are told. But our solutions often address imaginary or trivial manifestations of the problem. A primary-school student was suspended for kissing a classmate on the cheek. Junior-high students were forbidden to hug one another. Teachers are afraid to hug crying kids. Workers have been disciplined for keeping a photo of their bikini-clad wife on their desk. Men are afraid to compliment the appearance of female co-workers. But at the same time, serious accusations that the President of the United States made both wanted and unwanted sexual advances on the job and betrayed his solemn marital vows are dismissed as nobody’s business.

We love to focus on minor matters while ignoring major ones. We fixate on teen smoking, but pay scant attention to rising teen drug and alcohol use. We stress sex education, but do little about low test scores in reading, math, and science. In the military, we push social engineering programs but neglect combat readiness. We worry over the number of children who lack health insurance, but ignore over a million young lives liquidated by abortion each year.

Review of Unconventional Partners: Reli­gion and Liberal Culture in the United States

That sweet Evangelical wife has her regulation 1.8 children — and then what?

Letter to the Editor: December 1992