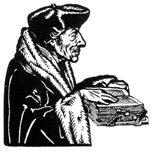 A RESPONSE TO MICHAEL DAVIES

Traditionalist groups have long complained that Vatican II’s Declaration on Religious Liberty (Dignitatis humanae) is “heretical.” In defending each person’s right to religious freedom, this document, they say, contradicts prior papal teachings and negates the obligation that anyone belonging to a false religion has to embrace the one true faith found only in the Catholic Church. Michael Davies argues the traditionalist case in his book The Second Vatican Council and Religious Liberty (The Neumann Press). In the end he concludes cautiously that there is an apparent contradiction between the traditional papal teaching and the teaching of Dignitatis humanae, even though I shall not claim that a contradiction exists. All that I wish to do is to state that I do not see how the traditional teaching and that of Dignitatis humanae can be reconciled…

The striking thing about Davies’s book, however, is that he makes it easier to show that there is no contradiction between the two.

Among the many issues raised by Davies regarding this apparent incompatibility, one, by his own admission, is foundational: “If the absence of a right to say what is false in public can be reconciled with a right not to be prevented from saying what is false, then the teaching of Dignitatis humanae can be reconciled with the traditional teaching.”

This admission by Davies is a tribute to his diligence and honesty. In his diligence he has pinpointed amid myriad peripheral issues the possible conflict between Dignitatis humanae (DH) and the pre-conciliar teachings. In his honesty he has admitted that the conflict stands or falls with this one issue. (By the way, he acknowledges that DH “teaches correctly that there can be no moral right to teach error….”) In other words, he has given us a bull’s-eye at which to aim. If #1 (“the absence of a right to say what is false in public”) can be reconciled with #2 (the presence of “a right not to be prevented from saying what is false”), then his case collapses.

Michael Davies’s own book reveals there is no contradiction.