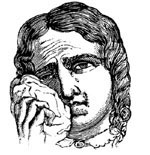 By Jeffrey Essmann | June 2021
Jeffrey Essmann is an essayist and poet living in New York. His work has appeared in numerous magazines and literary journals, among them America, Dappled Things, The Saint Austin Review, PILGRIM, The Road Not Taken, and various venues of the Benedictine monastery with which he is an oblate. He is editor of the Catholic Poetry Room page on the Integrated Catholic Life website.

I was recently accosted by a woman in the vestibule of my parish church for unsafe masking behavior while lectoring at a weekend Mass. I was taken aback at first, as I knew the woman only by sight. Then I remembered that the scolding of perfect strangers was enjoying a vogue in these masked and distanced days. The woman was quite intense and clearly angry. She said I had endangered the entire congregation. She said I made her feel unsafe.

I offer the following in my defense: I was seated in the front row of a small set of pews roughly adjacent to the altar platform, separated from the congregation proper by the transept aisle, a good nine or ten feet. My accuser was seated in the back row of a similar set of pews on the opposite side of the platform — that is, across the church — nearly 40 feet away. I was masked throughout the liturgy, except for the 15 minutes or so from the First Reading to the Prayers of the Faithful. I was not coughing; I was not sneezing. I was, I admit, breathing.

But the woman would brook no explanation, and, sensing that she was tending toward escalation rather than reconciliation, I ended the encounter as politely as I could.

As I was praying for her the next day, I prayed that she might be relieved of her fear. But, in one of those excursuses that too frequently mark my prayer, I also suddenly wondered where she got the idea that she was supposed to feel safe. I understand, of course, the basic human desire to feel safe, but I also recognize that actual human safety is a myth. Like many people, I look back on my childhood as marked by a sense of safety, and to a good degree it was. I was raised in the heart of a loving family, lived in a good neighborhood, and attended a good school. But I also remember a yellowing sheet of paper taped to the door of the laundry room in the basement. It was from the city’s Department of Civil Defense: a map of Milwaukee with concentric bands arcing from downtown to the outer suburbs, each band delineating the degree of damage relative to a direct hit by an atomic bomb. My family lived in the Heavy Damage Zone, our nearest escape route a couple miles from the house. I remember a birthday when, just cutting into the cake, tornado sirens went off.

As always, when contemplating the political order, we should keep in mind the psalmist’s exhortation: “Put not your trust in princes.”