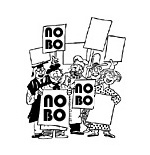 By Kenneth D. Whitehead | May 2017
In July-August 2001, Kenneth D. Whitehead, R.I.P., a former U.S. Assistant Secretary of Education, was a writer living in Falls Church, Virginia, and a Contributing Editor of the NOR. His latest book was One, Holy, Catholic, and Apostolic: The Early Church Was the Catholic Church (Ignatius, 2000).

Ed. Note: Throughout 2017, in commemoration of our fortieth year of publication, we are featuring one article per issue from the NOR’s past. This article originally appeared in our July-August 2001 issue (volume LXVIII, number 7) and is presented here unabridged. Copyright © 2001.

Ideological slogans might not always seem to be very important. Sometimes, however, they can reveal basic and persistent mindsets. This is the case with the slogan that originated in the French Revolution, “No enemies to the Left.” Students of European politics will recognize that this slogan has persisted, and that the ideas behind it still apply to today’s politics.

In his 1928 classic, The French Revolution: A Monarchist History, Pierre Gaxotte describes the inexorable logic of revolutionary “progress”:

The revolutionary period was characterized by allowing successive avant-garde parties or factions to take political power while riots and disturbances in the streets dictated the actual government policies that were adopted. Against the royal court and the privileged classes, the members of the National Assembly appealed to the turbulent sectors of the capital. Even while privately deploring the excesses committed from July 13 on, they closed their eyes to them because they wanted to hold in reserve the power of the clubs and of the streets. Thus they became prisoners of the alliance they had made; they became prisoners of the formula “no enemies to the left” (pas d’ennemis à gauche).

The relative moderates initially responsible for getting the Estates General convoked in order to deal with the financial crisis of the French monarchy were very soon shunted aside by the more radical elements, who quickly resorted to extra-legal means to convert the Estates General into a National Assembly. These revolutionaries in the Assembly soon fell from power, however, giving way to yet more radical elements. Each successive party or faction that came to power faced the same ongoing, volatile revolutionary situation.

Outlaw Blues... 'Diversity is the Hallmark of our Nation'... Homosexual Civil Unions in Sweden & Norway... What Is More Dangerous: Smoking or Homosexuality?... Is God a Psychopath?... Just Click for Confession... 'Nothing Positive Comes from Iraq," Says Pope Benedict... A Disconnect... The New Mass Just Can't Be Fixed...

Edwin O’Connor’s The Edge of Sadness

Fr. Hugh Kennedy, the narrator and protagonist, lacks gla­mor, jets to no international colloquia on Third World grievances, and worries not a whit over his sexuality.