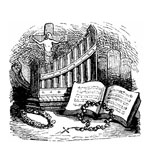 TWO PERSPECTIVES ON THE THIRD MISSAL (Part I)

By Bill Kassel | November 2013
Bill Kassel is a writer, communications consultant, media producer, and liturgical musician based in Michigan. His essays, original songs, and random rants can be found online at his blog, www.billkassel.com. His forthcoming novel, My Brother's Keeper, is currently being presented for publication.

During the early 1980s I was involved in a?Catholic music ensemble that had started out as a typical “guitar group,” accompanying at Vigil Mass on Saturday nights, but grew into a freestanding music ministry involved in diocesan events and evangelistic outreach. Through my involvement in music ministry I was frequently exposed to the prickliness of left-leaning Catholics. Once, when we were to give a concert for a community of religious women, we found our repertoire subject to pre-approval. A song containing the line “Keep going onward till the battle is over” raised eyebrows. We had to explain that the lyrics were metaphorical and the battle in question was merely the struggle of life.

Playing for a variety of parishes and retreats, I witnessed such post-Vatican II novelties as question-and-answer homilies, extemporized Eucharistic prayers, and of course, liturgical dance. Performing at a large religious-education conference, I was introduced to a colorful array of “progressive” Catholic characters — both clerical and lay — as well as to diverse theological speculations that stretched the limits of Christian orthodoxy.

In other areas of my life, too, I have encountered the outlook of the Catholic Left. Working as a freelance writer and creative director, I once developed publications for a Catholic women’s college with a highly regarded nursing program. The nursing director objected to a photograph I intended to use as a cover image: a student receiving her pin signifying completion of the nursing curriculum. The director, a nun, explained that featuring an individual student so prominently “doesn’t reflect our charism,” which was oriented to group sharing rather than individual accomplishment.

I cite these incidents not to disparage nuns — or free-thinking theologians or liturgical dancers, for that matter — but to illustrate my firsthand experience with the Catholic Left and its ideological sensibilities.

Obsequious to a Fault

A review of Catholic Teaching on Homosexuality: New Paths to Understanding