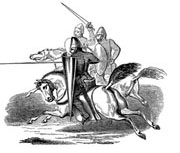 ‘Friendly’ Fire Does the Most Damage In the Catholic Civil War

STANDING UP FOR OUR CONVICTIONS BY KNEELING

By Michael Forrest | May 2003
Michael Forrest is a Catholic apologist, and works with Priests for Life. He is also a composer and musician, and plays with his brother Sean Forrest in a contemporary Christian band (for information on the band, go to seanforrest.com).

The National Catholic Register (Jan. 26) printed an article by Leon Suprenant, President of Catholics United for the Faith, regarding kneeling for Communion, titled “Standing Up (and Not Kneeling) for the Church.” Suprenant does sympathize with those who desire to kneel before our Lord to receive Communion. However, he asserts that U.S. Catholics are not free to kneel for Communion. He states that “The U.S. bishops last year specified that ‘the norm for reception of holy Communion is standing.'” In conclusion, he writes, “Catholic worship allows ample room for diversity of expression, but when it comes to gestures and postures at Mass, if Simon (Peter) says stand, we stand. If Simon (Peter) says kneel, we kneel. Anything else is a recipe for liturgical anarchy and ultimately a divided church.” The problem is, however, that the Church is already divided, and Simon (Peter) — i.e., St. Peter’s current successor — has never commanded us to stand to receive Communion.

Overall, Suprenant clearly believes that the foundational issue is obedience to the U.S. bishops, and the only proper response is immediate and assiduous compliance.

He also states that “standing is also considered a reverential posture…. We stand at several key times during the Mass, such as the proclamation of the Gospel.” But I do not believe that Suprenant would seriously want to contend that standing is as reverent as kneeling.

Regardless, he forges on: “The bishops, then, were left with choosing among two legitimate ways of physically expressing reverence during Communion and selected one. The Church desires uniformity in bodily gestures and postures as a sign of unity among members of Christ’s body.” I find the assertion that the bishops are pursuing “uniformity” or even “unity” completely untenable. Even Suprenant admits that “other more significant deviations from the rite are ignored or even encouraged and mandated by local Church officials. One example is the Eucharistic Prayer, where the norm in the United States is for the faithful to kneel, yet some priests and bishops routinely require the faithful to stand, which inevitably leads to confusion, cynicism and conflict” (italics added). I agree. Only, I would substitute “many” for “some.” And there are other occasions in the Mass where uniformity is at least an equally valid concern and yet most parishes deviate from it. It strains credibility to the breaking point to suggest the bishops felt compelled to focus a laser beam on the issue of kneeling for Communion out of a universally high regard for uniformity. Frankly, I have become convinced that many bishops consider kneeling to be an embarrassing testimony against and obstacle to their vision of a minimalist Catholicism.

Moreover, there seems to be a deafening catechetical silence about bowing one’s head before receiving our Lord when standing, per the new norm. Furthermore, we are permitted to receive under one or both species. And we are still permitted the option of receiving Communion on the hand or the tongue — for now at least. Where exactly is the desire for liturgical uniformity here?

Liturgical dance has never been part of the liturgical tradition of the Latin Church, and never been deemed appropriate in the West.