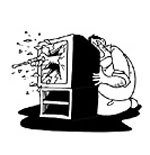 Since its beginning, Christianity has struggled to reconcile two of its Founder’s injunctions: “Be in the world, but not of it” and “Be as wise as ser­pents, harmless as doves.” The line between “in” and “of” — and between serpentine and dove-like — has always been rather blurry — as church histo­ry reveals.

The temptation to turn stones into bread at the expense of fidelity, and the compulsion to sell indulgences and indulge in selling, have long haunt­ed the church’s leaders and members.

At the end of the 20th century, such prob­lems are clearly evident in the discovery of television by America’s fundamentalist/evangelical camp.

Begun in the frontier revivalism of the late 18th and early 19th centuries, this distinctively American religious camp may be distinguished from mainline Protestantism, Roman Catholicism, and Eastern Orthodoxy by its strident personal proselytizing, apocalyptical vision, hard-shell dog­matism, and flat insistence on a literally interpret­ed Bible.

Because of a basically suspicious mindset, leaders of these churches have long kept the media, specifically television, at arm’s length. Since the turn of the century, everything from novels and dance halls and radio and vaudeville to the emer­gence of television has been labeled as “ministers of Satan.” And well they may be — but the curious item here is the evolving evangelical acceptance of most of these social forms, to be used, ostensibly, “for the work of the Gospel.”

It is important to distinguish between the terms “fundamentalist” and “evangelical.” The term “fundamentalist” may be traced to a set of theological volumes published in the 1920s that set forth “the fundamentals of the faith” against the growing Protestant liberalism imported from continental biblical scholarship. Those churches and clergymen who sided with the “old-fashioned Gospel” against skeptical views of Scripture be­came known as fundamentalists. The label also came to be associated with a strict moral code forbidding smoking, dancing, drinking — certainly any kind of premarital sexual activity, including, at times, hand-holding. Not only morally, but also po­litically conservative, such churches became quite exclusivist, even isolationist, finding security in their insularity and in the belief that their views alone pleased God. Others were bound for hell.

The current identification of the Christian life with consumerism, suburban as­pirations, and a gamut of other materialistic concerns denies the incarna­tion — makes it incredible.