Volume > Issue > Bring Back the Pictures 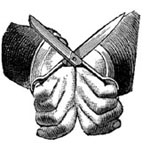 Bring Back the Pictures

By Barbara Kralis | November 2001
Barbara Kralis, with her husband, Mitch, directs the Jesus Through Mary Foundation, in Howe, Texas, and edits Semper Fidelis, a Catholic newsletter. Barbara may be reached by e-mail at Avemaria@earthlink.net.

During the Civil War, few Americans knew what was really taking place on the battlefields. In 1863, one man, Alexander Gardner, a photographer in the new field of photogravure, dragged his wooden cameras and metal plates onto the killing fields and captured images of Americans slaughtered by one another.

By way of couriers on horseback, Gardner sent his photo plates back to New York publishers, and, for the first time, American families saw the horrific images of their fathers, brothers, husbands, and sons lying dead and mutilated in once serene pastures. The result was the education of a people, and the war soon came to an end. No one can dispute the power of a poignant picture.

On January 22, 1993, the St. Louis Post-Dispatch rejected a prolife advertisement submitted and paid for at no small price ($25,000) by Missouri Right to Life. The ad consisted of a simple black-and-white photograph of a plastic doll with its arms and legs disconnected and laid next to its disconnected head and torso. The photo was too controversial for the Post-Dispatch. Truth does have a way of being controversial.

Sen. Bob Smith has used five black-and-white sketches depicting partial-birth abortions to convince the members of Congress to pass bans on this form of infanticide. The pictures did what speeches could not.

Ex-abortionist Dr. Nathanson refers to “permissive abortion” as a “crime” and “an unmitigated evil."

The Rise of the Abortion Party

Suppose that, in the 1960s, several hundred Americans in favor of overturning the conventional prohibitions on abortion established a new political party...

Liberalism is, in its essence, universal sovereignty premised on the expendability of life inside the individual’s sovereign domain.