Volume > Issue > A Dialogue of Forms 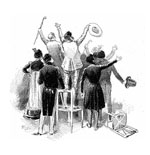 A Dialogue of Forms

By W. Patrick Cunningham | July-August 2015
W. Patrick Cunningham, a deacon of the Archdiocese of San Antonio ministering in St. Pius X parish, is celebrating his fortieth anniversary of writing for national Catholic publications. He and his wife, Carolyn, have been married for forty-four years and have three daughters and ten grandchildren.

This July marks the eighth anniversary of Pope Emeritus Benedict XVI’s promulgation of Summorum Pontificum, his motu proprio permitting any Latin-rite priest to celebrate Mass, the Divine Office, and the sacraments according to the 1962 missal and similar liturgical books. The Holy Father established the Mass of Paul VI as the “ordinary” form of the Eucharist, and the Mass according to the 1962 Missal as the “extraordinary” form. In an accompanying letter to bishops, he wrote that “the two Forms of the usage of the Roman Rite can be mutually enriching,” and he suggested new saints and Prefaces be inserted into the 1962 Missal, as an example of such enrichment. Recently, the Extraordinary Form (EF) and Ordinary Form (OF) sat down to discuss the first eight years of their formal co-existence, and invited me (ME) to record and moderate the conversation.

ME: Thank you both for agreeing to discuss the first eight years of your formal co-existence as two complementary forms of the Mass. I’d like to suggest some simple ground rules for our conversation.

ME: First, we need to express ourselves in English, so that our readers can easily understand us.

ME: Second, we need to stay aware of Pope Benedict’s concern that the dialogue strengthen the unity of the Church and increase the respect that is due to both forms.

EF: But I have suffered so much disrespect over the past fifty years. I was considered obsolete while “hootenanny” Masses, “polka” Masses, and those infernal amplifiers and drum sets proliferated. How are those in any way “ordinary”?

OF: Hey now, many of those Masses were experimental, and the experimental period ended in the 1980s. I admit that abuses of my form have happened and continue to happen, but what about the fifteen- and twenty-minute Sunday Masses of the preconciliar period? What about the priests whose last blessing ended with their only English admonition, “Let’s clear the parking lot”?

Our Churches Will Be Empty -- Part II

"It is our duty to be vigilant... Because, in the end, the people will assist at the Tridentine Mass and our churches will empty."

Ed. Note: The first installment of this two-part series appeared in our September issue.